The Cook: A Novel (Paperback) 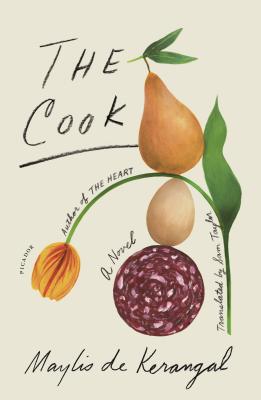 Trying to jumpstart your reading in 2023? Might I humbly suggest a novella? Specifically, The Cook! This story about a young chef's coming-of-age reads like poetry, has amazing food writing and such a strong sense of place it will having you asking your friends, "Should I move to Paris and become a chef?" by the end. You've been warned.

More like a poetic biographical essay on a fictional person than a novel, The Cook is a coming-of-age journey centered on Mauro, a young self-taught cook. The story is told by an unnamed female narrator, Mauro’s friend and disciple who we also suspect might be in love with him. Set not only in Paris but in Berlin, Thailand, Burma, and other far-flung places over the course of fifteen years, the book is hyperrealistic—to the point of feeling, at times, like a documentary. It transcends this simplistic form, however, through the lyricism and intensely vivid evocative nature of Maylis de Kerangal’s prose, which conjures moods, sensations, and flavors, as well as the exhausting rigor and sometimes violent abuses of kitchen work.

In The Cook, we follow Mauro as he finds his path in life: baking cakes as a child; cooking for his friends as a teenager; a series of studies, jobs, and travels; a failed love affair; a successful business; a virtual nervous breakdown; and—at the end—a rediscovery of his hunger for cooking, his appetite for life.

Maylis de Kerangal is the author of several books in French, including Naissance d’un pont, (published in English as Birth of a Bridge), which won of the Prix Franz Hessel and Prix Médicis in 2010; Réparer les vivants, which won the Grand Prix RTL-Lire and the Student Choice Novel of the Year from France Culture and Télérama and whose English translation, The Heart, was one of the Wall Street Journal’s Ten Best Fiction Works of 2016 and the winner of the 2017 Wellcome Book Prize; and Un chemin de tables, whose English translation, The Cook, was a New York Times Book Review Editors’ Choice. She lives in Paris.

Sam Taylor has written for The Guardian, Financial Times, Vogue and Esquire, and has translated such works as the award-winning HHhH by Laurent Binet, and the internationally-bestselling The Truth about the Harry Quebert Affair by Joël Dicker.

"Brief but superb . . . An antidote to the bravado of kitchen confidentials and to the rise of celebrity chefs, the book is restrained, private, and careful." --The New Yorker

"This short book, beautifully translated by Sam Taylor, reads like a prose poem . . . de Kerangal’s food writing is incantatory; the accumulation of minutiae hypnotic . . . I was left hungry for more." --Moira Hodgson, The Wall Street Journal

"Narrated with almost documentary-like precision . . . this portrait of self-taught chef Mauro is not just a beautifully delineated character study or inside look at a hard way to make a living but a perceptive meditation on the meaning of work itself . . . All this in just over 100 pages and done brilliantly. Highly recommended." --Library Journal (starred review)

"Kerangal's concise tale is as engaging for the relatable ordinariness of its characters and events as for its tracking of a chef's professional development. The sparse prose increases the impact of carefully chosen details, and the translation retains the power of the compact novel's original French. Kerangal proves that the best reads can come in small packages." --Stacey Hayman, Booklist

"[The Cook] encompasses more emotional and sensory detail [than The Heart]; it's slim but potent . . . an admirable literary lagniappe." --Kirkus