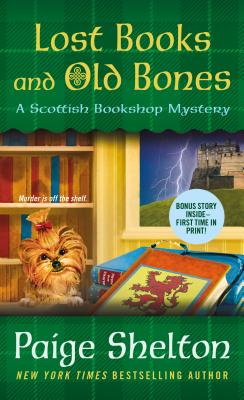 This is book number 3 in the A Scottish Bookshop Mystery series.

*INCLUDING A BONUS STORY, A CHRISTMAS TARTAN, FOR THE FIRST TIME IN PRINT!*

Welcome back to Cracked Spine bookstore, where a collection of antique texts may hold the key to solving a present-day murder.

Delaney Nichols, originally of Kansas, is settling happily into her new life buying and selling rare books in Edinburgh, Scotland. When her new friends, who are students at a nearby medical school, come to the shop to sell a collection of antique medical books, Delaney’s sixth sense tells her that the multivolume work is of great value. But once Delaney finalizes the transaction, things take a dramatic turn. . .

One of the medical students has turned up dead in the alley behind the Cracked Spine. Is there a sinister connection between the origin of these books and the people whose hands they fell into? Delaney seems to have her answer when, lo and behold, she finds some old scalpels in the bookshop’s warehouse—and discovers that they belonged to a long-dead doctor with ties to past crimes. But how can one American-born bookseller take it upon herself to solve this historic case? With the killer still on the loose, Delaney has only so much time left to find out. . .

“[For] readers who appreciate bookseller sleuths such as Marianne Macdonald’s Dido Hoare or Joan Hess’s Claire Malloy…The feisty Delaney is an appealing protagonist and the secondary characters are charming as well.”—Library Journal

“A complicated mystery with plenty of historically-based characters and whose ending provides more than one kind of surprise.”—Kirkus Reviews

Praise for the Scottish Bookshop Mysteries:

"A complex plot, a cast of amiable characters, an array of suspects and an enchanting Scottish setting combine to create a clever entry in a capital series, one that provides multiple pleasures, whether or not accompanied by a single malt."—Richmond Times-Dispatch on Lost Books and Old Bones

“Move over Claire Fraser; American bibliophile Delaney Nichols is about to take Scotland-and legions of cozy mystery readers-by storm! As warm and inviting as a cup of tea and a serving of fresh-from-the-oven shortbread. Readers will fall in love with The Cracked Spine.”—Ellery Adams, New York Times bestselling author of the Books By The Bay Mysteries

“Shelton pens a perfectly twisty-turny puzzler of a mystery in The Cracked Spine. With the engagingly bookish, amateur sleuth Delaney Nichols leading the way around the richly detailed city of Edinburgh, the reader is fully immersed in her world as she tries to expose the lies and deceptions that hide the brutal truth behind a murder. Full of wit and whimsy, with a clever plot and delightful characters, this mystery is a fantastic read!” —Jenn McKinlay, New York Times bestselling author of the Cupcake Mysteries

“A great read for book lovers, mystery seekers, and anyone who enjoys a determined new heroine. Sure to be a winning series.” —Erika Chase, nationally bestselling author of Read and Buried

“Kilts, killers, and a keen sleuth ... oh my! Ms. Shelton has crafted a foolproof plot, endearing characters, and prose that immediately transports readers to enchanting Edinburgh ... and leaves them eager for a return trip. Readers will be delighted with this new series.” —Lucy Arlington, New York Times bestselling author of the Novel Idea Mysteries

“With a wee bit of the brogue, Paige Shelton weaves a Scottish tale of mystery and intrigue filled with a quirky cast of characters, including the clever Delaney Nichols, an American fish-out-of-water who believes in the magic of books. You will want to make repeat visits to The Cracked Spine.” —Daryl Wood Gerber, nationally bestselling author of The Cookbook Nook Mysteries