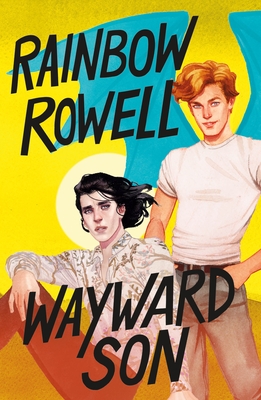 This is book number 2 in the Simon Snow Trilogy series.

“A sequel to Carry On...every bit as fine as the first. A classic page-turner.”— Booklist, starred review

Simon Snow is back and he's coming to America!
The story is supposed to be over.

Simon Snow did everything he was supposed to do. He beat the villain. He won the war. He even fell in love. Now comes the good part, right? Now comes the happily ever after…

So why can’t Simon Snow get off the couch?

What he needs, according to his best friend, is a change of scenery. He just needs to see himself in a new light.

That’s how Simon and Penny and Baz end up in a vintage convertible, tearing across the American West. They find trouble, of course. (Dragons, vampires, skunk-headed things with shotguns.) And they get lost. They get so lost, they start to wonder whether they ever knew where they were headed in the first place.

Come on, Simon Snow. Your hero’s journey might be over – but your life has just begun.

"At last! A sequel to Carry On...every bit as fine as the first...overall excellence of a book in which every vista pleases and every character delights. Carefully plotted, the book is a classic page-turner right to the open ending which, o frabjous day, promises a sequel to the sequel! One can hardly wait." —Booklist (Starred Review) on Wayward Son

"Rowell imbues her magic with awe and spectacle. It's a powerful, politically minded allegory about sexual, ethnic and class identity - with a heady shot of teenage lust." —New York Times Book Review on Carry On

"It’s a brilliantly addictive, genuinely romantic story about teenagers who can’t be neatly sorted into houses, coping with stress and loss and the confusion of just trying to be who they are. It’s as if Rowell turned the Harry Potter books inside out, and is showing us the marvelous, subversive stuffing inside." —Time Magazine on Carry On

"The funny, wised-up dialogue, the tumultuous, sweet, and sexy love story— is grade-A Rowell...almost impossible to put down." —Publishers Weekly (starred review) on Carry On

"Stock up on copies—this one begs to be reread." —Booklist (starred review) on Carry On

"Carry On is a triumph. Thrilling and sexy, funny and shocking, deeply moving and very, very magical. Trust me, you have never, ever seen a wizard school like this." —Lev Grossman, #1 New York Times bestselling author of The Magicians trilogy