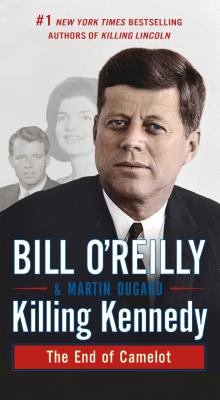 A riveting historical narrative of the shocking events surrounding the assassination of John F. Kennedy, and the follow-up to mega-bestselling author Bill O'Reilly's Killing Lincoln

More than a million readers have thrilled to Bill O'Reilly's Killing Lincoln, the page-turning work of nonfiction about the shocking assassination that changed the course of American history. Now the iconic anchor of The O'Reilly Factor recounts in gripping detail the brutal murder of John Fitzgerald Kennedy—and how a sequence of gunshots on a Dallas afternoon not only killed a beloved president but also sent the nation into the cataclysmic division of the Vietnam War and its culture-changing aftermath.

In January 1961, as the Cold War escalates, John F. Kennedy struggles to contain the growth of Communism while he learns the hardships, solitude, and temptations of what it means to be president of the United States. Along the way he acquires a number of formidable enemies, among them Soviet leader Nikita Khrushchev, Cuban dictator Fidel Castro, and Allen Dulles, director of the Central Intelligence Agency. In addition, powerful elements of organized crime have begun to talk about targeting the president and his brother, Attorney General Robert Kennedy.

In the midst of a 1963 campaign trip to Texas, Kennedy is gunned down by an erratic young drifter named Lee Harvey Oswald. The former Marine Corps sharpshooter escapes the scene, only to be caught and shot dead while in police custody.

The events leading up to the most notorious crime of the twentieth century are almost as shocking as the assassination itself. Killing Kennedy chronicles both the heroism and deceit of Camelot, bringing history to life in ways that will profoundly move the reader. This may well be the most talked about book of the year.

BILL O’REILLY’s success in broadcasting and publishing is unmatched. He was the iconic anchor of The O'Reilly Factor, the highest-rated cable news broadcast in the nation for 16 consecutive years. His website BillOReilly.com is followed by millions all over the world, his No Spin News is broadcast weekday nights at 8 and 11 (ET) on The First TV, and his O’Reilly Update is heard weekdays on more than 225 radio stations across the country. He has authored an astonishing seventeen #1 bestsellers; his historical Killing series is the bestselling nonfiction series of all time, with over 18 million books in print. O’Reilly has received a number of journalism accolades, including three Emmys and two Emmy nominations. He holds a History degree from Marist College, a master's degree in Broadcast Journalism from Boston University, and a master’s degree from Harvard’s John F. Kennedy School of Government. O’Reilly lives on Long Island where he was raised. His philanthropic enterprises have raised tens of millions for people in need and wounded American veterans.

MARTIN DUGARD is the New York Times bestselling author of several books of history, among them the Killing series, Into Africa, and The Explorers. He and his wife live in Southern California with their three sons.

“All the suspense and drama of a popular thriller.” —Husna Haq, The Christian Science Monitor