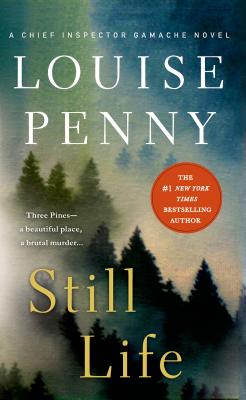 This is book number 1 in the Chief Inspector Gamache Novel series.

“I've fallen in love with a charming rural village in Canada and with a most delightful man, Chief Inspector Armand Gamache of the Surete du Quebec. Excellent characterization and plotting and a wonderful sense of humor make this a treasure to be savored. Don't miss it!”
— Susan Wasson, Bookworks, Albuquerque, NM

Read the series that inspired Three Pines on Prime Video.

Chief Inspector Armand Gamache of the Surêté du Québec and his team of investigators are called in to the scene of a suspicious death in a rural village south of Montreal. Jane Neal, a local fixture in the tiny hamlet of Three Pines, just north of the U.S. border, has been found dead in the woods. The locals are certain it's a tragic hunting accident and nothing more, but Gamache smells something foul in these remote woods, and is soon certain that Jane Neal died at the hands of someone much more sinister than a careless bowhunter.

Still Life introduces not only an engaging series hero in Inspector Gamache, who commands his forces---and this series---with integrity and quiet courage, but also a winning and talented new writer of traditional mysteries in the person of Louise Penny.

LOUISE PENNY is the author of the #1 New York Times, USA Today, and Globe and Mail bestselling series of Chief Inspector Armand Gamache novels, and coauthor with Hillary Rodham Clinton of the #1 New York Times bestselling thriller State of Terror. She has won numerous awards, including a CWA Dagger and the Agatha Award (eight times), and was a finalist for the Edgar Award for Best Novel. In 2017, she received the Order of Canada for her contributions to Canadian culture. Louise lives in a small village south of Montréal.

“It's hard to decide what provides the most pleasure in this enjoyable book: Gamache, a shrewd and kindly man constantly surprised by homicide; the village, which sounds at first like an ideal place to escape from civilization; or the clever and carefully constructed plot.” —Chicago Tribune

“Terrific. Like a virtuoso, Penny plays a complex variation on the theme of the clue hidden in plain sight.” —Publishers Weekly (starred review)

“A gem of a book.” —Booklist (starred review)

“A gem of a debut novel--clever, charming, with perceptively realized characters… and the enormously appealing Chief Inspector Armand Gamache. I can't wait for the next installment.” —Deborah Crombie, author of Water Like a Stone

“An excellent, subtle plot full of understanding of the deeper places in human nature, and many wise observations that will enrich the reader long after the pages are closed.” —Anne Perry, author of Long Spoon Lane

“Georges Simenon kept Maigret going for over a hundred books. It will be a delight for all of us who love detective fiction if Louise Penny can stay around long enough to do the same for Gamache.” —Reginald Hill, author of The Stranger House

“Still Life is a masterpiece of a traditional drawing room mystery, repainted in the autumnal colors of the Canadian countryside. Louise Penny is a storytelling artist.” —Julia Spencer-Fleming, author of To Darkness and to Death

“What a joy it is to discover a detective like Armand Gamache, strong, calm and charismatic and at work on a good mystery in a believable setting.” —Peter Lovesey, author of The Circle

“What a joy to read a crime novel written with such skill and integrity, strong on character and atmosphere...I couldn't put it down.” —Margaret Yorke, author of False Pretences

“Still Life is a lovely, clever book and I hope I shall be reading a lot more by Louise Penny!” —Ann Granger, author of That Way Murder Lies