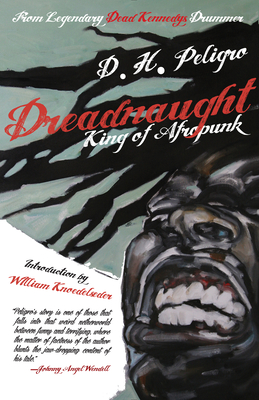 "D.H. Peligro is a miracle. His otherworldly talent, inhuman drive, and propulsive energy are all testaments to the power of sheer, unchecked will. His ability to cheat death over and over again is proof that it is shockingly hard to kill some people. This grotesque memoir of sweat and grind, art and addiction, hopelessness and transcendence is narrated with the chaotic violence of a hardcore moshpit and the reluctant wisdom of a man who has somehow survived."

A no-holds-barred memoir of legendary Dead Kennedys and Red Hot Chili Peppers drummer D.H. Peligro, Dreadnaught chronicles Peligro from his pre-DK years growing up in a deprived St. Louis ghetto to San Francisco with Jello Biafra, East Bay Ray, and Klaus Flouridefrom Los Angeles with the Chili Peppers through years of drug and alcohol abuse all over the world amidst a backdrop of some clearly defining periods of late twentieth century music history.

D. H. Peligro is the longtime and current drummer for legendary San Francisco punk band Dead Kennedys. In 1988, he joined the Red Hot Chili Peppers, replacing Jack Irons, before being fired for drug and alcohol issues. He has released three albums with his band Peligro: Peligro (released in 1995 on Jello Biafra's Alternative Tentacles record label); Welcome to America; and Sum of Our Surroundings, which won Rock Album of the Year at the 2004 American Independent Music Awards. He also recently recorded a cover of Jimi Hendrix's "Purple Haze," which was nominated for a Grammy Award. He lives in Los Angeles. William Knoedelseder spent 12 years as a reporter at the Los Angeles Times, where his groundbreaking coverage of the recording industry for the newspaper's financial section resulted in the critically acclaimed book Stiffed: A True Story of MCA, the Music Business, and the Mafia.

"Peligro would get lots of shit from his black friends for liking White people's musicbut White people did not want him in their bands. Punk was a great outlet for him. I first saw him in a lost band, SSIa drummer with a shit-eating grin who could sing like Little Richard." Jello Biafra