The Coward: Book I of the Quest for Heroes (Paperback) 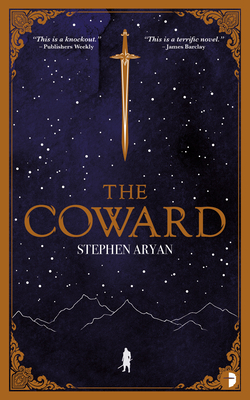 Starting years after Kell Kressia has saved the land from the Ice Lich this is realistic and sometimes haunting look at the real cost of being a hero in a world of fantasy. Stephen Aryan crafts an impressive narrative that fans of more realistic feeling fantasy stories like Game of Thrones shouldn't miss.

Who will take up the mantle and slay the evil in the Frozen North, saving all from death and destruction? Not Kell Kressia, he's done his part...

Kell Kressia is a legend, a celebrity, a hero. Aged just seventeen he set out on an epic quest with a band of wizened fighters to slay the Ice Lich and save the world, but only he returned victorious. The Lich was dead, the ice receded and the Five Kingdoms were safe.

Ten years have passed Kell lives a quiet farmer's life, while stories about his heroism are told in every tavern across the length and breadth of the land. But now a new terror has arisen in the north. Beyond the frozen circle, north of the Frostrunner clans, something has taken up residence in the Lich's abandoned castle. And the ice is beginning to creep south once more.

For the second time, Kell is called upon to take up his famous sword, Slayer, and battle the forces of darkness. But he has a terrible secret that nobody knows. He's not a hero - he was just lucky. Everyone puts their faith in Kell the Legend, but he's a coward who has no intention of risking his life for anyone...

Stephen Aryan is the author of the Age of Darkness and Age of Dread trilogies. His first novel, Battlemage, was a finalist for the David Gemmell Morningstar Award for best debut fantasy novel. It also won the inaugural Hellfest Inferno Award in France. He has previously written a comic book column and reviews for Tor.com. In addition, he has self-published and kickstarted his own comics.

"Packing in an epic’s worth of action and feeling, this thought-provoking fantasy argues that even the most vicious monster battles are less harrowing than the struggles within men’s souls. This is a knockout."
– Publishers Weekly, Starred Review

"Magnificent...Exactly the sort of breathless adventure we need after a lockdown year"
– SFX Magazine

"Aryan’s newest series is sure to please  fantasy readers; he wraps everything up masterfully while leaving just enough unresolved questions for the sequel"
– Booklist

"A tremendous sword & sorcery romp with a lot of heart and plenty to say. I really enjoyed this book."
– Peter McLean, author of Priest of Bones

"Stephen Aryan puts the epic into Epic Fantasy."
– Den Patrick, author of The Boy with the Porcelain Blade

"Aryan's battle scenes are visceral masterpieces that transport the reader deep into the melee."
– Taran Matharu, author of the Summoner series

"Sparkling action sequences punctuate keen dialogue and a journey full of colour and interest... Compelling, consuming and a novel in which no character can be considered supporting cast... Bring on the sequel."
– James Barclay, author of The Chronicles of the Raven

"Fast-paced and action-packed, steeped in plots and schemes – a great fantasy tale."
– Ed Cox, author of The Relic Guild Trilogy