The Nashville Way: Racial Etiquette and the Struggle for Social Justice in a Southern City (Politics and Culture in the Twentieth-Century South #17) (Hardcover) 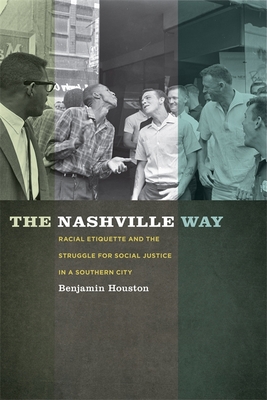 By Benjamin Houston
This item is currently unavailable and can not be ordered.

Among Nashville's many slogans, the one that best reflects its emphasis on manners and decorum is the Nashville Way, a phrase coined by boosters to tout what they viewed as the city's amicable race relations. Benjamin Houston offers the first scholarly book on the history of civil rights in Nashville, providing new insights and critiques of this moderate progressivism for which the city has long been credited.

Civil rights leaders such as John Lewis, James Bevel, Diane Nash, and James Lawson who came into their own in Nashville were devoted to nonviolent direct action, or what Houston calls the "black Nashville Way." Through the dramatic story of Nashville's 1960 lunch counter sit-ins, Houston shows how these activists used nonviolence to disrupt the coercive script of day-to-day race relations. Nonviolence brought the threat of its opposite--white violence-- into stark contrast, revealing that the Nashville Way was actually built on a complex relationship between etiquette and brute force. Houston goes on to detail how racial etiquette forged in the era of Jim Crow was updated in the civil rights era. Combined with this updated racial etiquette, deeper structural forces of politics and urban renewal dictate racial realities to this day. In The Nashville Way, Houston shows that white power was surprisingly adaptable. But the black Nashville Way also proved resilient as it was embraced by thousands of activists who continued to fight battles over schools, highway construction, and economic justice even after most Americans shifted their focus to southern hotspots like Birmingham and Memphis.

Benjamin Houston is a lecturer at Newcastle University in the United Kingdom. He is the former director of the Remembering African American Pittsburgh oral history project at the Center for Africanamerican Urban Studies and the Economy at Carnegie Mellon University.