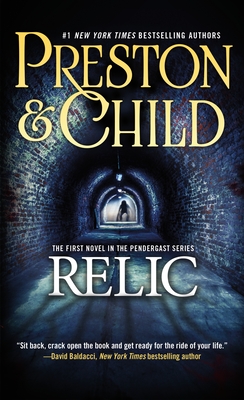 This is book number 1 in the Relic series.

Relic: The #1 New York Times bestselling thriller by Douglas Preston's and Lincoln Child, with more than one million copies sold to date

Just days before a massive exhibition opens at the popular New York Museum of Natural History, visitors are being savagely murdered in the museum's dark hallways and secret rooms. Autopsies indicate that the killer cannot be human...

But the museum's directors plan to go ahead with a big bash to celebrate the new exhibition, in spite of the murders.

Museum researcher Margo Green must find out who--or what--is doing the killing. But can she do it in time to stop the massacre?

Douglas Preston is the co-author with Lincoln Child of the celebrated Pendergast series of novels, including such bestselling titles as Fever Dream, The Book of the Dead, The Wheel of Darkness, and Relic, which became a number one box office hit movie. His solo novels include the New York Times bestsellers Impact, Blasphemy, The Codex, and Tyrannosaur Canyon. Preston is an expert long-distance horseman, a member of the elite Long Riders Guild, and a Fellow of the Royal Geographical Society. He has travelled to remote parts of the world as an archaeological correspondent for The New Yorker. He also worked as an editor and writer at the American Museum of Natural History in New York and taught nonfiction writing at Princeton University. Preston is on the Board of Directors for International Thriller Writers, and serves on the Governing Council of the Authors Guild.

Lincoln Child is the author of Utopia and Death Match, as well as a number of New York Times bestselling thrillers with Douglas Preston. He lives with his wife and daughter in Morristown, New Jersey.

“What might happen if a creature from Jurassic Park came to New York City.” —The Chicago Tribune

“Wildly cool...Thrill hounds couldn't ask for a creepier environment...a thriller staged in the world's scariest building, with no room for the squeamish.” —Kirkus Reviews