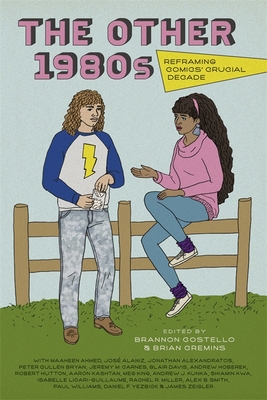 Fans and scholars have long regarded the 1980s as a significant turning point in the history of comics in the United States, but most critical discussions of the period still focus on books from prominent creators such as Frank Miller, Alan Moore, and Art Spiegelman, eclipsing the work of others who also played a key role in shaping comics as we know them today. The Other 1980s offers a more complicated and multivalent picture of this robust era of ambitious comics publishing.

The twenty essays in The Other 1980s illuminate many works hailed as innovative in their day that have nonetheless fallen from critical view, partly because they challenge the contours of conventional comics studies scholarship: open-ended serials that eschew the graphic-novel format beloved by literature departments; sprawling superhero narratives with no connection to corporate universes; offbeat and abandoned experiments by major publishers, including Marvel and DC; idiosyncratic and experimental independent comics; unusual genre exercises filtered through deeply personal sensibilities; and oft-neglected offshoots of the classic "underground" comics movement of the 1960s and 1970s. The collection also offers original examinations of the ways in which the fans and critics of the day engaged with creators and publishers, establishing the groundwork for much of the contemporary critical and academic discourse on comics. By uncovering creators and works long ignored by scholars, The Other 1980s revises standard histories of this major period and offers a more nuanced understanding of the context from which the iconic comics of the 1980s emerged.

Brannon Costello is the James F. Cassidy Professor of English at Louisiana State University. His books include Neon Visions: The Comics of Howard Chaykin and the coedited volume Comics and the U.S. South. Brian Cremins is professor of English at Harper College and the author of Captain Marvel and the Art of Nostalgia. He serves as an associate editor for INKS: The Journal of the Comics Studies Society.