Waiting 'Til the Midnight Hour: A Narrative History of Black Power in America (Paperback) 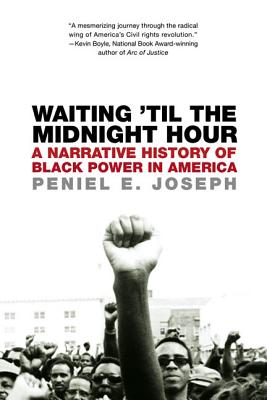 "Once in a while a book comes along that projects the spirit of an era; this is one of them . . . Vibrant and expressive . . . A well-researched and well-written work." —The Philadelphia Inquirer

With the rallying cry of "Black Power!" in 1966, a group of black activists, including Stokely Carmichael and Huey P. Newton, turned their backs on Martin Luther King's pacifism and, building on Malcolm X's legacy, pioneered a radical new approach to the fight for equality. Drawing on original archival research and more than sixty original oral histories, Peniel E. Joseph vividly invokes the way in which Black Power redefined black identity and culture and in the process redrew the landscape of American race relations. In a series of character-driven chapters, we witness the rise of Black Power groups such as the Student Nonviolent Coordinating Committee and the Black Panthers, and with them, on both coasts of the country, a fundamental change in the way Americans understood the unfinished business of racial equality and integration.

Waiting 'Til the Midnight Hour traces the history of the Black Power movement, that storied group of men and women who would become American icons of the struggle for racial equality.

Peniel Joseph is Professor of History at Tufts University. The recipient of fellowships from the Woodrow Wilson International Center for Scholars and the Ford Foundation, his work has appeared in Souls, New Formations, and The Black Scholar, and he is the author of the book Waiting ‘Til the Midnight Hour. He lives in Brooklyn, New York.

“Peniel Joseph represents the best of a new generation of scholars whose work will substantially revise our understanding of the Black Freedom Movement. Provocative and masterfully written, Waiting 'Til the Midnight Hour not only reveals the radical roots of Black Power but places the key activists and struggles within a global framework. It is one of those critically important books that will be read and debated for many years to come.” —Robin D. G. Kelley, author of Freedom Dreams: The Black Radical Imagination