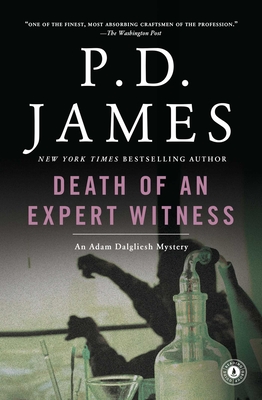 This is book number 6 in the Adam Dalgliesh Mystery series.

In yet another page-turning installment in the bestselling Adam Dalgliesh mystery series from P.D. James, “the reigning mistress of murder” (Time), the Inspector must investigate the murder of a twisted forensic scientist and explore the dark secrets within his laboratory.

When a brilliant forensic scientist is found murdered in his own laboratory, Scotland Yard is called to the scene. The victim, a well-respected, authoritative member of the scientific community, was unpleasant to and greatly disliked by those who worked closest to him, leaving detectives with a wealth of suspects and murderous motives. P.D. James’ beloved detective Adam Dalgliesh is the one man who can sort through the lies, chasing down the truth to the book’s powerful climax.

P.D. James deftly weaves another tale of intrigue in Death Of an Expert Witness. Engaging and thrilling, she takes readers along with her troubled detective on a case rife with psychological thrills.

"The reigning mistress of murder."
— Time