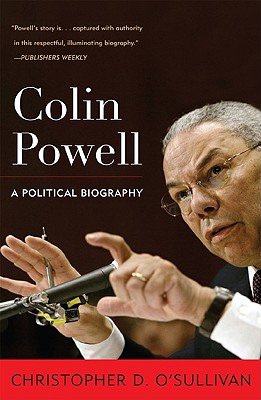 Few figures in the past quarter-century have played a more significant role in American foreign policy than Colin Powell. He wielded power at the highest levels of the most important foreign policy bureaucracies: the Pentagon, the White House, the joint chiefs, and the state department. As national security advisor in the Ronald Reagan administration, chairman of the joint chiefs of staff under George H.W. Bush and Bill Clinton, and secretary of state during George W. Bush's first term, he played a prominent role in four administrations, Republican and Democrat, spanning more than twenty years. Powell has been engaged in the most important debates over foreign and defense policy during the past two decades, such as the uses of American power in the wake of the Vietnam war, the winding down of the Cold War and the quest for new paths for American foreign policy, and the interventions in Panama (1989) and the Persian Gulf (1990-1991). During the Clinton era, he was involved in the controversies over interventions in Bosnia and Somalia. As America's top diplomat from 2001 to 2004, he helped shape the aims and goals of U.S. diplomacy after September 11, 2001, and in the run-up to the Iraq War. In this exploration of Powell's career and character, Christopher D. O'Sullivan reveals several broad themes crucial to American foreign policy and yields insights into the evolution of American foreign and defense policy in the post-Vietnam, post-Cold War eras. In addition, O'Sullivan explores the conflicts and debates between different foreign policy ideologies such as neo-conservatism and realism. O'Sullivan's book not only explains Powell's diplomatic style, it provides crucial insights into the American foreign policy tradition in the modern era.

Christopher D. O'Sullivan teaches history at the University of San Francisco. He is the author of Sumner Welles, Postwar Planning, and the Quest for a New World Order, 1937-1943, which won the American Historical Association's Gutenberg-e Prize in 2003, and The United Nations: A Concise History.