To Speak for the Trees: My Life's Journey from Ancient Celtic Wisdom to a Healing Vision of the Forest (Hardcover) 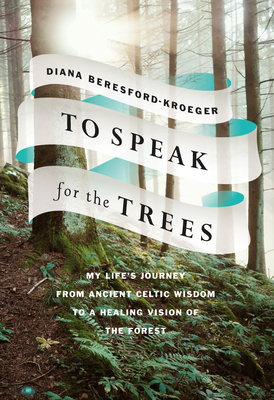 Canadian botanist, biochemist and visionary Diana Beresford-Kroeger's startling insights into the hidden life of trees have already sparked a quiet revolution in how we understand our relationship to forests. Now, in a captivating account of how her life led her to these illuminating and crucial ideas, she shows us how forests can not only heal us but save the planet.

When Diana Beresford-Kroeger--whose father was a member of the Anglo-Irish aristocracy and whose mother was an O'Donoghue, one of the stronghold families who carried on the ancient Celtic traditions--was orphaned as a child, she could have been sent to the Magdalene Laundries. Instead, the O'Donoghue elders, most of them scholars and freehold farmers in the Lisheens valley in County Cork, took her under their wing. Diana became the last ward under the Brehon Law. Over the course of three summers, she was taught the ways of the Celtic triad of mind, body and soul. This included the philosophy of healing, the laws of the trees, Brehon wisdom and the Ogham alphabet, all of it rooted in a vision of nature that saw trees and forests as fundamental to human survival and spirituality. Already a precociously gifted scholar, Diana found that her grounding in the ancient ways led her to fresh scientific concepts. Out of that huge and holistic vision have come the observations that put her at the forefront of her field: the discovery of mother trees at the heart of a forest; the fact that trees are a living library, have a chemical language and communicate in a quantum world; the major idea that trees heal living creatures through the aerosols they release and that they carry a great wealth of natural antibiotics and other healing substances; and, perhaps most significantly, that planting trees can actively regulate the atmosphere and the oceans, and even stabilize our climate.
This book is not only the story of a remarkable scientist and her ideas, it harvests all of her powerful knowledge about why trees matter, and why trees are a viable, achievable solution to climate change. Diana eloquently shows us that if we can understand the intricate ways in which the health and welfare of every living creature is connected to the global forest, and strengthen those connections, we will still have time to mend the self-destructive ways that are leading to drastic fires, droughts and floods.

DIANA BERESFORD-KROEGER is a world-recognized botanist, medical biochemist and author, whose work uniquely combines western scientific knowledge and the traditional concepts of the ancient world. Her books include The Sweetness of a Simple Life, The Global Forest, Arboretum Borealis, Arboretum America--which won the National Arbor Day Foundation Award for exemplary educational work on trees and forests--Time Will Tell, and A Garden for Life. Among many honours, Beresford-Kroeger was inducted as a WINGS WorldQuest fellow in 2010 and elected as a fellow of the Royal Canadian Geographical Society in 2011. More recently, in 2016, the Society named her one of 25 women explorers of Canada. Her work has inspired artists and writers, as well as leading scientists. She is the author and presenter of a feature documentary, Call of the Forest, and is also at the heart of an upcoming three-part series airing on PBS called The Truth about Trees. Currently she is advocating on behalf of an ambitious global "bioplan" encouraging ordinary people to develop a new relationship with nature and join together to restore the global forest.

“A leading scientist comes . . . with a simple and hopeful message about how to reverse the effects of climate change: plant more trees. . . . She would know. Beresford-Kroeger has a PhD in medical microbiology and botany. She’s published six books on trees and forests, and was the driving force behind the documentary Call of the Forest: The Forgotten Wisdom of Trees. She is a member of the Royal Geographical Society, which named her one of twenty-five women explorers of Canada. She is also among the Utne Reader’s World Visionaries. . . . Her memoir and speaking tour are timely. . . . Beresford-Kroeger said reaction to her memoir is ‘extraordinary.’ Readers have sent letters and called her after reading the book. It has been likened to Silent Spring by Rachel Carson and Small Is Beautiful: A Study of Economics as if People Mattered by E.F. Schumacher.” —Waterloo Region Record

“In her youth in Ireland Diana Beresford-Kroeger received an extraordinary and unique education in traditional Celtic plant lore. At university in Canada she specialized in biochemistry and merged what she learned and observed into her signature studies of trees, augmented by First Nation forest wisdom. This autobiography of learning ways to heal the damaged earth and break the tightening grip of climate crisis offers a rational and inclusive way to keep our future.” —Annie Proulx, author of The Shipping News

“Diana Beresford Kroeger has given readers a rare gift: an inspiring tale about trees, trauma and the very purpose of life. Her Celtic story works on you like a good walk in a pine forest: you can’t help but feel invigorated afterwards.” —Andrew Nikiforuk, award-winning journalist


PRAISE FOR THE SWEETNESS OF A SIMPLE LIFE:

“The very existence of this book—with its down-to-earth appeal to drink wine, eat seaweed, sleep more, enjoy yourself, eschew industrial food—is testament to the chaos and hostility of modern life. But Beresford-Kroeger is a firm and gentle guide back to kindness, back to connection, back to simplicity.” —Nick Saul and Andrea Curtis, co-authors of The Stop: How the Fight for Good Food Transformed a Community and Inspired a Movement

“This is a unique book, in its approach unlike any other I know. . . . Diana Beresford-Kroeger convincingly interweaves her scientific expertise and her extensive knowledge of ancient aboriginal wisdom and practices, and a path into a saner and safer world seems to emerge, a path that is open to all. Part of the magic of the book is its practical accessibility.” —Ursula Franklin, author of The Real World of Technology

“The Sweetness of a Simple Life is a thoughtful book with much insight into the fundamental relationship between simplicity, food and biochemistry. It’s a perfect read after a long day in the fields.” —Daniel Brisebois, former president of Canadian Organic Growers

“Her recommendations are inspiring and enlightening. . . . [H]er enthusiasm for and understanding of the natural world, and her poetic way of describing its glory and complexity, is satisfying.” —Maclean’s

“This is a gem of a book, packed with helpful advice.” —The Record