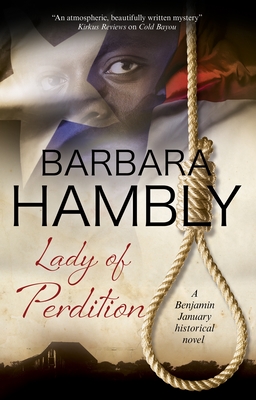 This is book number 17 in the Benjamin January Mystery series.

Benjamin January heads to the "Slaveholders' Republic" of Texas to locate a kidnapped girl and help a woman who saved him from the noose. April, 1840. Benjamin January knows no black person in their right mind would willingly go to the Republic of Texas but when his former pupil Selina Bellinger is kidnapped and enslaved, he has no choice. Once there he is saved from being hanged by Valentina Taggart, wife of the wealthy landowner of Rancho Perdition. After Valentina is accused of the murder of her husband, she in turn calls on Benjamin for help. To do so, he must abandon the safe haven of New Orleans, where people know he's a free man, to return to the self-proclaimed "Slaveholders' Republic". In a land still disputed between vengeful Comanche, disgruntled Mexican Tejanos, Americans who want to join the United States and those who want to keep Texas free, January must uncover what happened to Valentina's husband. Behind lies, betrayals and rising political tensions lies the answer . . . but finding it could cost Ben his life.