Buddenbrooks: The Decline of a Family (Vintage International) (Paperback) 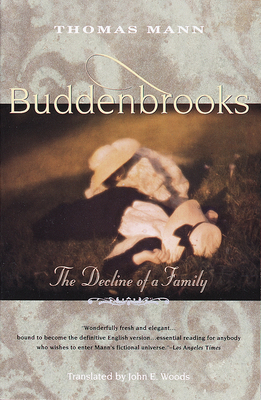 A Major Literary Event: a brilliant new translation of Thomas Mann's first great novel, one of the two for which he was awarded the Nobel Prize in literature in 1929.

Buddenbrooks, first published in Germany in 1900, when Mann was only twenty-five, has become a classic of modem literature -- the story of four generations of a wealthy bourgeois family in northern Germany. With consummate skill, Mann draws a rounded picture of middle-class life: births and christenings; marriages, divorces, and deaths; successes and failures. These commonplace occurrences, intrinsically the same, vary slightly as they recur in each succeeding generation. Yet as the Buddenbrooks family eventually succumbs to the seductions of modernity -- seductions that are at variance with its own traditions -- its downfall becomes certain.

In immensity of scope, richness of detail, and fullness of humanity, Buddenbrooks surpasses all other modem family chronicles; it has, indeed, proved a model for most of them. Judged as the greatest of Mann's novels by some critics, it is ranked as among the greatest by all. Thomas Mann was awarded the Nobel Prize for literature in 1929.

John E. Woods is the distinguished translator of many books -- most notably Arno Schmidt's Evening Edged in Gold, for which he won both the American Book Award for translation and the PEN Translation Prize; Patrick Suskind's Perfume, for which he again won the PEN Translation Prize in 1987; Mr. Suskind's The Pigeon and Mr. Summer's Story; Doris Dorrie's Love, Pain, and the Whole Damn Thing and What Do You Want from Me?; and Libuse Monikova's The Facade. Mr. Woods lives in San Diego and is currently at work on a translation of Thomas Mann's The Magic Mountain.

“A remarkable achievement . . . In Woods’s sparkling translation, the reader encounters a work that is closer in style, vocabulary, idiom, and tone to the original.”—NEW YORK TIMES BOOK REVIEW“Wonderfully fresh and elegant . . . Essential reading for anyone who wishes to enter Mann’s fictional universe.”—LOS ANGELES TIMES