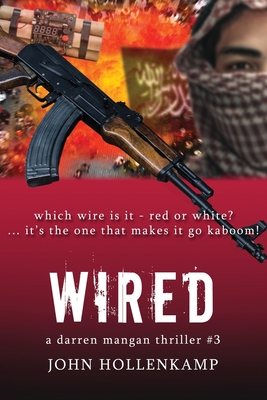 This is book number 3 in the Darren Mangan Thriller series.

In Queensland, cab driver Darren Mangan receives an unexpected message from his old friend Nick Powell. Nick is in a difficult situation, but what he reveals to Darren is only half the story. Indigenous police detective Joel Shallowater returns to work after recovering from near fatal wounds on his previous case. Unhappily assigned to the recently formed Criminal Gangs Squad, he also has to deal with a newcomer. Tessa Jones is also an indigenous cop, but her silver-spoon upbringing and attitudes challenge Joel's more ground-level view of where he comes from. In France, handsome university student and devout Muslim Haroun Ibrahimi is surprised by a visit from a classmate. Angelique is a stunning young woman of Arabic descent. Though not of his faith, she intrigues and arouses Haroun. Khalil Bouhouche is less devout than his best friend Haroun. Increasingly alienated and alarmed as his 'blood brother's' beliefs grow more extreme, Khalil is unwittingly drawn into a vicious plot to commit mass murder on the other side of the world. In a race for the truth, who will stop the impending slaughter of innocent travelers and backpackers sandwiched on the decks of a passenger ferry off the coast of North Queensland? The explosive third and final Darren Mangan thriller.