Catch Her When She Falls: A Novel (Hardcover) 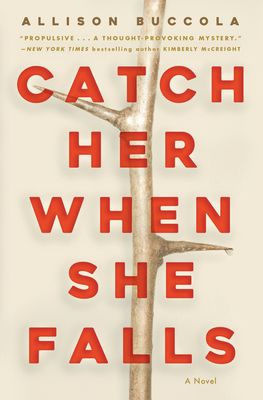 In this “propulsive” (Kimberly McCreight) debut thriller, a young woman questions everything she thought she knew about the shocking murder that changed her life when she was in high school.

Ten years ago, my boyfriend killed my best friend.

When Micah Wilkes was a senior in high school, her boyfriend was convicted of murdering her best friend, Emily, a star ballerina with a bright future. A decade later, Micah has finally moved on from the unforgivable betrayal and loss. Now the owner of a bustling coffee shop in her small hometown in Pennsylvania, she’s happily coupled up with another old high school friend, the two having bonded over their shared sorrow.

But when reminders of her past begin appearing at her work and home, Micah begins to doubt what she knows about Emily’s death. Questions raised on a true crime blog and in an online web sleuthing forum force her to reexamine her memories of that fateful night. She told the truth to the investigators on the case, but was there another explanation for Emily’s murder? A stranger in the woods. An obsessive former classmate. A domineering ballet instructor. Or the internet’s favorite suspect: Joshua, Emily’s outcast younger brother who hasn’t been seen since his sister’s death.

As Micah delves deeper into the case, she feels her grip on reality loosening, her behavior growing more and more secretive and unhinged. As she races to piece together the truth about that night ten years ago, Micah grapples with how things could have gone so wrong and wonders whether she, too, might be next to disappear.

Allison Buccola is an attorney with a JD from the University of Chicago. She lives outside Philadelphia with her husband and their two young children.

“A riveting mystery debut . . . an intriguing story about crime, punishment, and how a murder case changes countless lives forever—no matter what the verdict turns out to be.”—Mystery Scene

“Buccola’s deeply developed characters and simmering suspense propel this story of one woman’s quest to discover the truth about the mysterious death of her best friend.”—Liv Constantine, bestselling author of The Last Mrs. Parrish

“Promising . . . startling twists and troubling questions concerning guilt and justice . . . Psychological thriller fans will be curious to see what Buccola does next.”—Publishers Weekly

“Gripping and mesmerizing, reading Catch Her When She Falls is like watching a building catch fire, aware that dark ends are coming but unable to look away. Ten years after a shocking murder, amateur sleuths question whether the man in prison is responsible, causing his former girlfriend to reopen a case she never wanted to confront again. As new clues pile up, her paranoia and fear ratchet higher until almost everyone is a suspect. A portrait of a woman unraveling, this is the definition of ‘shirk all responsibilities and stay up until 2 a.m.’ reading. A superb story.”—Ashley Winstead, author of In My Dreams I Hold a Knife

“Richly atmospheric and thoroughly propulsive, Catch Her When She Falls is a thought-provoking mystery about the fraught interconnectedness of youth and the tragic limitations of teenage insight.”—Kimberly McCreight, New York Times bestselling author of Reconstructing Amelia and A Good Marriage

“A tense and twisting debut thriller . . . After receiving ominous warnings that the wrong person might be in prison for her best friend’s murder, Micah is in a desperate race for answers, but can she uncover the truth before her own life unravels? Catch Her When She Falls probes the dark shadows of guilt, suspicion, and obsession that surround a case where nothing is as it seems.”—Laura McHugh, author of What’s Done in Darkness