Empress of the East: How a European Slave Girl Became Queen of the Ottoman Empire (Hardcover) 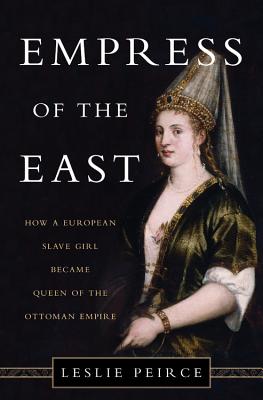 The "fascinating . . . lively" story of the Russian slave girl Roxelana, who rose from concubine to become the only queen of the Ottoman empire (New York Times).

In Empress of the East, historian Leslie Peirce tells the remarkable story of a Christian slave girl, Roxelana, who was abducted by slave traders from her Ruthenian homeland and brought to the harem of Sultan Suleyman the Magnificent in Istanbul. Suleyman became besotted with her and foreswore all other concubines. Then, in an unprecedented step, he freed her and married her. The bold and canny Roxelana soon became a shrewd diplomat and philanthropist, who helped Suleyman keep pace with a changing world in which women, from Isabella of Hungary to Catherine de Medici, increasingly held the reins of power.

Until now Roxelana has been seen as a seductress who brought ruin to the empire, but in Empress of the East, Peirce reveals the true history of an elusive figure who transformed the Ottoman harem into an institution of imperial rule.

"Engaging...Peirce persuasively recasts Roxelana as a pragmatist adept at navigating both palace politics and international relations, and as a pioneer who established a more powerful role for Ottoman women."—The New Yorker

"Peirce chronicles the remarkable life and times of Roxelana, the Eastern European slave girl who reshaped her own destiny after being kidnapped and inducted into the harem of Sultan Suleyman the Magnificent...Wielding her power during a juncture in history distinguished by many strong female leaders, her exceptional accomplishments are especially noteworthy considering her humble origins and all that she overcame."
—Booklist

"Fascinating from beginning to end, Peirce's telling of Roxelana's story illuminates her remarkable life and the evolution of the long-lived empire that straddled two continents."
—Publishers Weekly

"Empress of the East seems to offer a glimpse of proto-feminist life in a land otherwise known as an oppressive one for women...Fascinating."—Bookforum

"Leslie Peirce, one of the world's foremost historians of the Ottoman empire, has created a brilliant, absorbing, and profoundly insightful account of one of the most enigmatically interesting figures of the sixteenth century: Roxelana, the captive slave who ultimately reigned alongside Sultan Suleiman the Magnificent. Peirce is rightly celebrated for her expertise on the fascinating subject of the Ottoman harem, and there is no one better qualified to help us understand how Roxelana emerged from the sultan's harem to become one of the most powerful political figures of her times. This is a book that should be read by anyone interested in understanding the deep history of Turkey, the Ottoman empire, and the Muslim Middle East."
—Larry Wolff, author of The Singing Turk

"A riveting story of power, patronage and harem politics in sixteenth century Istanbul. Roxelana, the slave who became a sultana, deserves to figure at least as prominently in the annals of women's history as her famous European contemporaries."
—Sarah Gristwood, author of Game of Queens

"Leslie Peirce is uniquely qualified to tell the story of one of the greatest royal love affairs in world history. In her earlier, ground-breaking book, Peirce demystified the Ottoman harem. In Empress of the East, she demonstrates the same careful attention to primary sources, refusing to romanticise what we cannot know. Reality is far more compelling. This page-turning narrative of an Ottoman sultan's passion draws us deeply into the household of a couple that broke all the rules. Peirce sets Süleyman and Roxelana's intimate lives within the context of the times, to show how the personal was inescapably political. Roxelana has at last found the biographer she deserves."
—Caroline Finkel, author of Osman's Dream

"A brilliant book that restores one of the most fascinating women in Islamic history to prominence. Leslie Pierce, the foremost authority on the Ottoman imperial harem, has done her subject justice in this exquisitely crafted biography."
—Eugene Rogan, author of The Fall of the Ottomans

"It takes solid scholarship to turn the potentially Orientalist tale of a young slave who became the wife of the most powerful sovereign of the sixteenth century into an accurate and well-documented historical narrative. It takes talent to give this narrative the lively twist that makes it such a good read. It takes Leslie Peirce's years of experience with the study of the daily life of Ottoman women, high and low, to bring to the foreground the life and destiny of a woman, however powerful and exceptional, in a world of men. Roxelana/Hürrem's story is a novel and rather unique way to discover or revisit one of the most fascinating episodes of Ottoman history."
—Edhem Eldem, Bogazici University, Istanbul

"From harem girl to Ottoman queen-Roxelana is one of the most fascinating women of the sixteenth-century. Leslie Peirce brings Roxelana to life as wife, mother, and sultana, and gives us a vivid picture of her Muslim world. A gripping and well-told tale!"
—Natalie Zemon Davis, author of Trickster Travels: A Sixteenth-Century Muslim Between Worlds