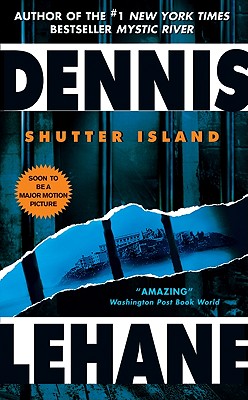 By Dennis Lehane
$7.99
Out of Stock - Not Available

The year is 1954. U.S. Marshal Teddy Daniels and his new partner, Chuck Aule, have come to Shutter Island, home of Ashecliffe Hospital for the Criminally Insane, to investigate the disappearance of a patient. Multiple murderess Rachel Solando is loose somewhere on this remote and barren island, despite having been kept in a locked cell under constant surveillance. As a killer hurricane bears relentlessly down on them, a strange case takes on even darker, more sinister shades -- with hints of radical experimentation, horrifying surgeries, and lethal countermoves made in the cause of a covert shadow war. No one is going to escape Shutter Island unscathed, because nothing at Ashecliffe Hospital is what it seems. But then neither is Teddy Daniels.

“A lollapalooza of a corkscrew thriller…sure to be the most talked–about thriller of the year.”
-Kirkus Reviews, starred review

“Nightmarish…it’s not a book to start before bedtime. Even if you finish before dawn, Shutter Island will trouble your sleep.”
-Orlando Sentinel

“Startlingly original…instantly cinematic… unfolds with increasing urgency until it delivers a visceral shock in its final moments.”
-New York Times

“Fasten your seat belts for a bumpy, breakneck ride…utterly absorbing… is an express train with no local stops…engrossing.”
-Boston Globe

“Combines the claustrophobia of . . . Agatha Christie . . . with the creepiness of a good Stephen King yarn. . . . Good luck putting this one down.
-San Francisco Chronicle Book Review

“The ride this novel provides is as good as entertainment gets.”
-Miami Herald

“There is no mystery…about how good this book is; like Mystic River, it’s a tour de force.”
-Publishers Weekly (starred review)