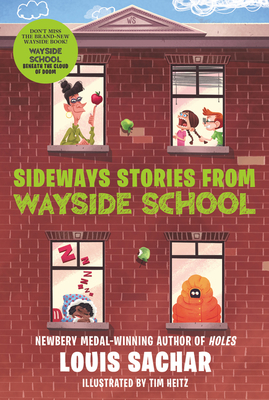 "I went through 8 years of schooling (8 YEARS!) being called the wrong name by one particular teacher. SIDEWAYS STORIES FROM THE WAYSIDE school perfectly captures these kinds of elementary school absurdities. Also, it's hilarious. A great book to read together!"

Bestselling and Newbery Medal-winning author Louis Sachar knows how to make readers laugh. And there are laughs galore in perennial favorite Sideways Stories from Wayside School, the first book in the series!

Accidentally built sideways and standing thirty stories high (the builder said he was very sorry for the mistake), Wayside School has some of the wackiest classes in town, especially on the thirtieth floor. That’s where you’ll meet Bebe, the fastest draw in art class; John, who only reads upside down; Myron, the best class president ever; and Sammy, the new kid—he’s a real rat.

More than fifteen million readers have laughed at the clever and hilarious stories of Wayside School. So what are you waiting for? Come visit Wayside School! Kids 7 to 13 will zoom through these chapter books—laughing their way through the fast, funny, silly but relatable stories.

“Rib-tickling. Sure to please.”
— Kirkus Reviews

“Sachar is the reigning king of oddball humor. These linked stories are both bizarre and sublime.”
— Brightly