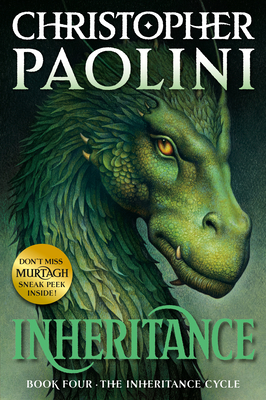 This is book number 4 in the The Inheritance Cycle series.

The astonishing, masterful conclusion to the Inheritance Cycle, perfect for fans of Lord of the Rings! The New York Times bestselling series has sold over 40 million copies and is an international fantasy sensation.

"Christopher Paolini is a true rarity." —The Washington Post

Not so very long ago, Eragon—Shadeslayer, Dragon Rider—was nothing more than a poor farm boy, and his dragon, Saphira, only a blue stone in the forest. Now the fate of an entire civilization rests on their shoulders.

Long months of training and battle have brought victories and hope, but they have also brought heartbreaking loss. And still, the real battle lies ahead: they must defeat Galbatorix. There will be no second chances. The Rider and his dragon have come further than anyone dared to hope. But can they topple the evil king and restore justice to Alagaësia? And if so, at what cost?

And don’t miss the most recent book set in Eragon's world, The Fork, the Witch, and the Worm: Tales from Alagaësia!

Christopher Paolini's abiding love of fantasy inspired him to write the Inheritance Cycle, which quickly became an internationally bestselling series. He began the first draft of the introductory book in the series, Eragon, at age fifteen. Christopher draws inspiration for the world of Eragon and his dragon, Saphira, from the natural beauty that surrounds his home in Montana: the tumultuous weather, the roaring Yellowstone River, and the soaring Beartooth Mountains. Find out more about Christopher and the Inheritance Cycle at paolini.net.

Praise for The Inheritance Cycle:

"Paolini is a spellbinding fantasy writer." –The Boston Globe

"A breathtaking and unheard of success." –USA Today

“Will appeal to legions of readers who have been captivated by the Lord of the Rings trilogy.” –School Library Journal