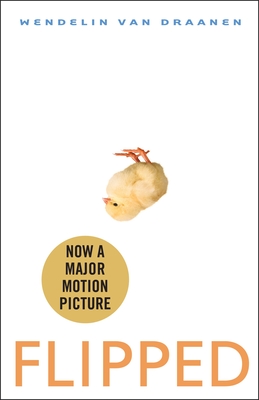 The first time she saw him, she flipped. The first time he saw her, he ran. That was the second grade, but not much has changed by the seventh. She says: “My Bryce. Still walking around with my first kiss.” He says: “It’s been six years of strategic avoidance and social discomfort.” But in the eighth grade everything gets turned upside down. And just as he’s thinking there’s more to her than meets the eye, she’ s thinking that he’s not quite all he seemed.

This is a classic romantic comedy of errors told in alternating chapters by two fresh, funny voices. Wendelin Van Draanen is at her best here with a knockout cast of quirky characters and a hilarious series of misunderstandings and missed opportunities. But underlying the humor are two teens in transition. They are each learning to look beyond the surface of people, both figuring out who they are, who they want to be, and who they want to be with.

Books have always been a part of Wendelin Van Draanen’s life. Her mother taught her to read at an early age, and she has fond memories of story time with her father, when she and her brothers would cuddle up around him and listen to him read stories.

Growing up, Van Draanen was a tomboy who loved to be outside chasing down adventure. She did not decide that she wanted to be an author until she was an adult. When she tried her hand at writing a screenplay about a family tragedy, she found the process quite cathartic and from that experience, turned to writing novels for adults. She soon stumbled upon the joys of writing for children.

Feedback from her readers is Van Draanen’s greatest reward for writing. “One girl came up to me and told me I changed her life. It doesn’t get any better than that,” she said. Van Draanen hopes to leave her readers with a sense that they have the ability to steer their own destiny—that individuality is a strength, and that where there’s a will, there’s most certainly a way.

Wendelin Van Draanen is the winner of the 1999 Edgar Allan Poe Award for Best Children’s Mystery Book for Sammy Keyes and the Hotel Thief and lives with her husband and two sons in California.

“We flipped over this fantastic book.”
–The Chicago Tribune

“With a charismatic leading lady kids will flip over, a compelling dynamic betweenthe two narrators and a resonant ending, this novel is a great deal larger than the sum of its parts.” -- Publishers Weekly, Starred review