The Brothers Karamazov: A Novel in Four Parts With Epilogue (Paperback) 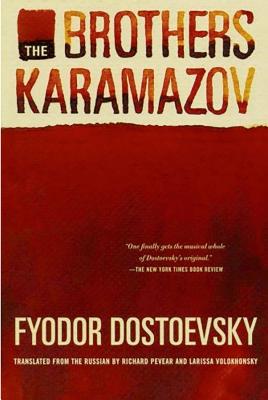 This award-winning translation by Richard Pevear and Larissa Volokhonsky remains true to the verbal
inventiveness of Dostoevsky’s prose, preserving the multiple voices, the humor, and the surprising modernity of the original. It is an achievement worthy of Dostoevsky’s last and greatest novel.

Fyodor Dostoyevsky (1821-81) was a Russian writer of novels, short stories and essays. His most famous work includes Crime and Punishment, The Idiot and The Brothers Karamazov. He is considered to be one of Europe's major novelists.

Richard Pevear and Larissa Volokhonsky were awarded the PEN/ Book-of-the-Month Translation Prize for The Brothers Karamazov and have also translated Dostoevsky's Crime and Punishment, Notes from Underground, Demons, and The Idiot.

Richard Pevear and Larissa Volokhonsky were awarded the PEN/ Book-of-the-Month Translation Prize for The Brothers Karamazov and have also translated Dostoevsky's Crime and Punishment, Notes from Underground, Demons, and The Idiot.

“[Dostoevsky is] at once the most literary and compulsively readable of novelists we continue to regard as great . . . The Brothers Karamazov stands as the culmination of his art--his last, longest, richest and most capacious book. [This] scrupulous rendition can only be welcomed. It returns to us a work we thought we knew, subtly altered and so made new again.” —Donald Fanger, Washington Post Book World

“It may well be that Dostoevsky's [world], with all its resourceful energies of life and language, is only now--and through the medium of this translation--beginning to come home to the English-speaking reader.” —John Bayley, The New York Review of Books

“Heartily recommended to any reader who wishes to come as close to Dostoevsky's Russian as it is possible.” —Joseph Frank, Princeton University

“Far and away the best translation of Dostoevsky into English that I have seen . . . faithful . . . extremely readable . . . gripping.” —Sidney Monas, University of Texas