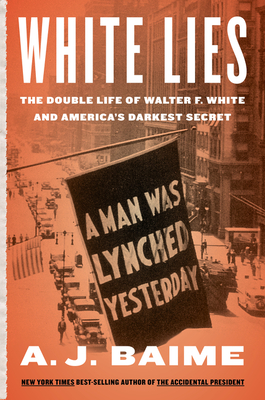 An “electrifying” biography of Walter White, a little-remembered Black civil rights leader who passed for white in order to investigate racist murders, help put the NAACP on the map, and change the racial identity of America forever (Chicago Review of Books).

Walter F. White led two lives: one as a leader of the Harlem Renaissance and the NAACP in the early twentieth century; the other as a white newspaperman who covered lynching crimes in the Deep South at the blazing height of racial violence. Born mixed race and with very fair skin and straight hair, White was able to “pass” for white. He leveraged this ambiguity as a reporter, bringing to light the darkest crimes in America and helping to plant the seeds of the civil rights movement.

White’s risky career led him to lead a double life. He was simultaneously a second-class citizen subject to Jim Crow laws at home and a widely respected professional with full access to the white world at work. His life was fraught with internal and external conflict—much like the story of race in America. Starting out as an obscure activist, White ultimately became Black America’s most prominent leader, during his time. A character study of White’s life and career with all these complexities has never been rendered, until now.

By the award-winning, New York Times bestselling author of The Accidental President, Dewey Defeats Truman, and The Arsenal of Democracy, White Lies uncovers the life of a civil rights leader unlike any other.

A.J. Baime is the New York Times bestselling author of The Accidental President: Harry S. Truman and the Four Months that Changed the World (2017), The Arsenal of Democracy: FDR, Detroit, and an Epic Quest to Arm an America at War (2014), Go Like Hell: Ford, Ferrari, and Their Battle for Speed and Glory at Le Mans (2009), and Dewey Defeats Truman: The 1948 Election and the Battle for America's Soul (2019). Baime is a longtime regular contributor to the Wall Street Journal, and his articles have also appeared in the New York Times, the Washington Post, and numerous other publications.

"White should rank alongside Thurgood Marshall, Martin Luther King Jr. and Malcolm X as a founding father of the civil rights era. Yet he is all but forgotten today. That oversight gets an overdue correction in A.J. Baime's engrossing new biography, White Lies: The Double Life of Walter F. White and America's Darkest Secret." — Los Angeles Times

"Electrifying... In White Lies, the latest deeply informative and exquisitely paced addition to a body of work...Baime aims to deliver White's astonishing story from undeserved obscurity." — Chicago Review of Books

"A captivating portrait of civil rights activist and novelist Walter White... Filled with vibrant period details and lucid explanations of legal and political matters, this is a riveting portrait of a complex and courageous crusader for racial equality."  — Publishers Weekly (starred review)

“A. J. Baime is a master storyteller and this is his finest work—a thrilling story and a stunning, smart, invaluable piece of American history that helps us better understand a forgotten hero and better understand the question of race in America. An extraordinary book.”  — Jonathan Eig, New York Times best-selling author of Ali: A Life

“White Lies, A. J. Baime’s well-researched and riveting biography of Walter F. White, should be required reading not only for NAACP leaders across America, but for any student of US history and Black leaders in the fight for civil rights. This book is a profound accounting of a pivotal time in our nation and of a man who helped shape its course. Far too many people have never heard of Walter. Or they only know precious little of his contributions to the cause. Now, no one has any excuse.” — Richard Rose, president, Atlanta branch of the NAACP

“Race is the central question of American history, and Walter White is the riddle within. Far less well-known than he should be, Walter’s dangerous investigations for the NAACP throughout the Jim Crow South changed the way Americans viewed the awful practice of lynching, which surely would have been Walter’s fate if his true identity were ever discovered. A. J. Baime’s White Lies finally gives this American hero his due. Impossible to put down, both thoughtful and gripping, White Lies proves that no one writes American history better than Baime.” — Jeffrey A. Engel, director, Center for Presidential History

"A.J. Baime tells White’s remarkable story in “White Lies: The Double Life of Walter F. White and America’s Darkest Secret.” Sure, it’s the biography of one man, yet it’s also a history of racism in America." — New York Daily News

"Today the history books tend to omit mentions of [Walter] White. Other attempts to bring this character to the modern era, mostly academic volumes, have fallen on similarly deaf ears... None of this stopped A. J. Baime... Baime’s book conveys the highlights of White’s life without bogging readers down in the details... It’s nothing short of amazing to see, for the first time, White grace the mainstream."
— Air Mail

“In White Lies, Baime engagingly points the spotlight on one of the most significant figures in American history, whose story deserves to be far more widely known.” — Booklist

"Baime's thoughtful and gripping biography will hopefully help White get his historical due." — Arlington Magazine

"The color line becomes an intriguing, complex story in A.J. Baime’s well-told narrative of a 'race man' who lived in two worlds and bucked the demands of both." — New York Sun