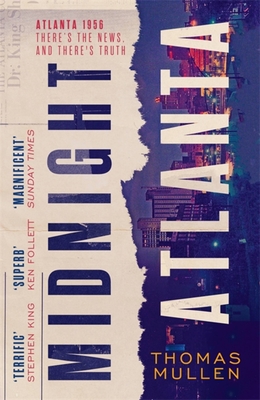 Midnight Atlanta is the stunning new novel in the award-nominated, critically acclaimed Darktown series, and sees a newspaper editor murdered against the backdrop of Rosa Parks' protest and Martin Luther King Jnr's emergence.

When Arthur Bishop, editor of Atlanta's leading black newspaper, is killed in his office, cop-turned-journalist Tommy Smith finds himself in the crosshairs of the racist cops he's been trying to avoid. To clear his name, he needs to learn more about the dangerous story Bishop had been working on.

Meanwhile, Smith's ex-partner Lucius Boggs and white sergeant Joe McInnis - the only white cop in the black precinct - find themselves caught between meddling federal agents, racist detectives, and Communist activists as they try to solve the murder.

With a young Rev. Martin Luther King Jnr making headlines of his own, and tensions in the city growing, Boggs and Smith find themselves back on the same side in a hunt for the truth that will put them both at risk.

PRAISE FOR THE DARKTOWN SERIES

Thomas Mullen is the author of the crime novels Darktown, which was nominated for two CWA Daggers, and Lightning Men. His book The Last Town on Earth was named Best Debut Novel of 2006 by USATODAY. He was also awarded the James Fenimore Cooper Prize for excellence in historical fiction for The Many Deaths of the Firefly Brothers and The Revisionists. His works have been named to Year's Best lists by the Chicago Tribune and USATODAY, among others. His stories and essays have been published in Grantland, Paste, and the Huffington Post, and his Atlanta Magazine true crime story about a novelist/con man won the City and Regional Magazine Award for Best Feature. He lives in Atlanta with his wife and sons.

An exemplary and compelling series . . . Enlightening and admirable—Crime Time

All the ingredients drive the story through a terrific shoot-out and surprises to an explosive climax. Genius!—Peterborough Evening Telegraph

Modern American literature at its most eye-opening and important and crime fiction at its compelling, excellent best—Morning Star