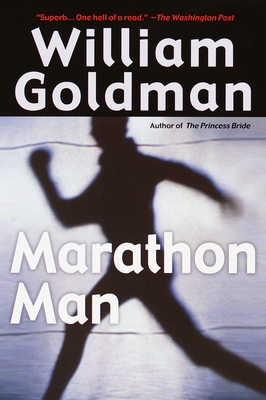 "The dizzyingly sensational elements of this taut thriller are wired together to light up the brain's pleasure centers like a short-circuited jackpot machine. An international syndicate of assassins works all angles of a diamond smuggling conspiracy that culminates in an iconic round of extreme dental torture. This is the Holocaust revenge fantasy that once and for all declares that it isn't safe to be a Nazi."

William Goldman's remarkable career spans more than five decades, and his credentials run the gamut from bestselling novelist to Oscar-winning screenwriter to Hollywood raconteur. He's beloved by millions of readers as the author of the classic comic-romantic fantasy The Princess Bride. And he's notorious for creating the most harrowing visit to the dentist in literary and cinematic history--in one of the seminal thrillers of the twentieth century. . . .

Tom "Babe" Levy is a runner in every sense: racing tirelessly toward his goals of athletic and academic excellence--and endlessly away from the specter of his famous father's scandal-driven suicide. But an unexpected visit from his beloved older brother will set in motion a chain of events that plunge Babe into a vortex of terror, treachery, and murder--and force him into a race for his life . . . and for the answer to the fateful question, "Is it safe?"

William Goldman is an Academy Award–winning author of screenplays, plays, memoirs, and novels. His first novel, The Temple of Gold (1957), was followed by the script for the Broadway army comedy Blood, Sweat and Stanley Poole (1961). He went on to write the screenplays for many acclaimed films, including Butch Cassidy and the Sundance Kid (1969) and All the President’s Men (1976), for which he won two Academy Awards. He adapted his own novels for the hit movies Marathon Man (1976) and The Princess Bride (1987).