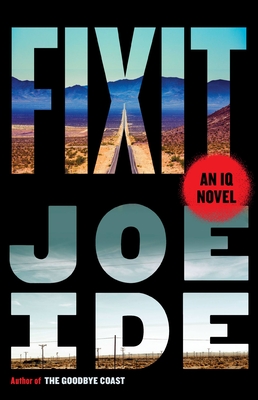 This is book number 6 in the An IQ Novel series.

In this sixth installment in the critically acclaimed and beloved series, IQ must rescue Grace from a maniacal hitman who bears a bone-deep grudge against him

Isaiah Quintabe’s first love, Grace, has been kidnapped by his sworn enemy, the professional hitman Skip Hanson. Skip is savage and psychotic, determined to punish Isaiah for sending him to prison and destroying his life. Isaiah and his sometimes partner, ex-hustler Juanell Dodson, together again, must track scant clues through L.A.’s perilous landscape as Grace’s predicament grows more uncertain.

A complication arises in the form of Winnie Hando, a homicide detective with something to prove. Stubborn and effective, Winnie sees Isaiah’s efforts as an obstruction to the investigation and a possible embarrassment: an unlicensed PI can’t be seen doing the department’s job better than the department. Winnie tries to stop Isaiah while pursuing the case herself, each hindering the other’s progress. As the desperate hunt winds on, Isaiah fears that even if he can bring Grace home alive, things between them will never be the same. This latest series installment is an explosive collision of larger-than-life characters, shotguns, vicious dogs, stampeding horses, and Ide’s signature energy, grit, and profundity.

Joe Ide grew up in South Central Los Angeles and currently lives in Santa Monica, California. His IQ series has won the Anthony, Shamus and Macavity Awards, and been nominated for the Edgar, Barry, CWA New Blood Dagger and Strand Book Critics Awards. The IQ books are currently in development as an original TV series.

PRAISE FOR JOE IDE AND THE IQ SERIES:

“A journeyman writer and a superb storyteller.”?Jeff Mannix, The Durango Telegraph

"Ide has displayed a rare ability to mix dark comedy and gut-churning drama…mixmaster Ide's compulsion to blend light and dark (Isaiah's confrontation with the serial killers, while gruesome, takes the form of "a slapstick movie shot in a burning insane asylum") affects the two plots in surprising ways, again producing an emotion-rich form of character-driven tragicomedy, but one in which peril forever loiters in the shallows.”?Booklist

“The plot lines are becoming even more ferocious. And IQ keeps getting… smarter? Yep. And the ending? YIKES. Book six Mr. Ide? Bring. It. ON!”?Berkley McDaniel, The Southern Bookseller Review

"A brand-new comedic franchise with a bright future... Aggressively entertaining plotting is paired with the kind of dialogue for which readers love Don Winslow. This series is a Los Angeles classic right from the start." ? Janet Maslin, New York Times

"Joe’s brilliant imagining of what Sherlock Holmes would be like if he came out of East Long Beach."?Mike Lupica, New York Daily News