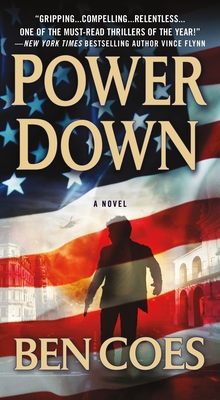 This is book number 1 in the A Dewey Andreas Novel series.

A major North American hydroelectric dam is blown up and the largest off-shore oil field in this hemisphere is destroyed in a brutal, coordinated terrorist attack. But there was one factor that the terrorists didn't take into account when they struck the Capitana platform off the coast of Colombia—slaughtering much of the crew and blowing up the platform—and that was the Capitana crew chief Dewey Andreas. Dewey, former Army Ranger and Delta, survives the attack, rescuing as many of his men as possible. But the battle has just begun.

While the intelligence and law enforcement agencies scramble to untangle these events and find the people responsible, the mysterious figure of Alexander Fortuna—an agent embedded into the highest levels of American society and business—sets into play the second stage of these long-planned attacks. The only fly in the ointment is Dewey Andreas—who is using all his long-dormant skills to fight his way off the platform, then out of Colombia and back to the U.S., following the trail of terrorists and operatives sent to stop him. Power Down is a gripping, compelling debut thriller from a powerful new author, an amazing talent certain to join the ranks of the genre's finest writers.

“Power Down is terrific! With a gripping story, compelling characters, a relentless pace, and nerve-wracking suspense, Power Down is one of the must-read thrillers of the year. Don't miss this debut of novelist Ben Coes and the introduction of Dewey Andreas--you'll devour this one and wait anxiously for their return.” —Vince Flynn, New York Times bestselling author of Pursuit of Honor

“Coes pumps new heat, blood, and flat-out action into a well-worn premise--terrorists are out to break America by attacking its energy resources--in his frighteningly plausible thriller debut.” —Publishers Weekly

“I loved Power Down! It's a fresh, exciting thriller and the action scenes are big, vivid and authentic, at times even breathtaking. An impressive debut for Ben Coes. I was blown away.” —David Morrell, New York Times bestselling author of Creepers and creator of Rambo

“A ripping thriller from an exciting new novelist. Power Down kept me glued, turning the pages. Lots of action, a terrific hero, and a slimy villain--thrillers don't get any better.” —Stephen Coonts, New York Times bestselling author of The Disciple

“Power Down marks the emergence of a major new talent in the political thriller genre--no small feat in a field already packed with big names like Vince Flynn, Brad Thor, and David Baldacci. In terms of sheer entertainment value, author Ben Coes and his hero, the unusually but memorably named Dewey Andreas, are easily and immediately competitive with the very best the thriller field has to offer.” —Fiction Addict

“One of those rare, glue-in-your-seat books. Sit down, pick it up, and start reading. You aren't going anywhere for anything until you finish it.” —Bookreporter.com