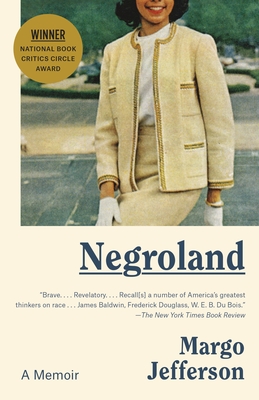 Jefferson takes us into an insular and discerning society: “I call it Negroland,” she writes, “because I still find ‘Negro’ a word of wonders, glorious and terrible.”

Margo Jefferson was born in 1947 into upper-crust black Chicago. Her father was head of pediatrics at Provident Hospital, while her mother was a socialite. Negroland’s pedigree dates back generations, having originated with antebellum free blacks who made their fortunes among the plantations of the South.

It evolved into a world of exclusive sororities, fraternities, networks, and clubs—a world in which skin color and hair texture were relentlessly evaluated alongside scholarly and professional achievements, where the Talented Tenth positioned themselves as a third race between whites and “the masses of Negros,” and where the motto was “Achievement. Invulnerability. Comportment.”

Jefferson brilliantly charts the twists and turns of a life informed by psychological and moral contradictions, while reckoning with the strictures and demands of Negroland at crucial historical moments—the civil rights movement, the dawn of feminism, the falsehood of post-racial America.

The winner of a Pulitzer Prize for criticism, Margo Jefferson was for years a book and arts critic for Newsweek and The New York Times. Her writing has appeared in, among other publications, Vogue, New York magazine, and The Nation, and Guernica. Her memoir, Negroland, received the National Book Critics Circle Award for Autobiography. She is also the author of On Michael Jackson and is a professor of writing at Columbia University School of the Arts.

“Jefferson is a national treasure and her memoir should be required reading across the country.” —Vanity Fair

“[A] masterpiece. . . . A phenomenal study-cum-memoir about the black bourgeoisie.” —Hilton Als, author of White Girls

“A veritable library of African-American letters and a sumptious compendium of elegant style. . . . [Jefferson] paints her rich inner and outer landscape with deft, impressionistic strokes.” —The Boston Globe

“Provocative and insightful. . . . Melancholic and hopeful, raw and disarming. . . . A moving memoir that is an act of courage in its vulnerability.” —Isabel Wilkerson, author of The Warmth of Other Suns

“Poignant. . . . Harrowing. . . . In Negroland, Jefferson is simultaneously looking in and looking out at her blackness, elusive in her terse, evocative reconnaissance, leaving us yearning to know more.” —Los Angeles Times

“Jefferson combines memoir with cultural critique in a series of unsparing vignettes.” —The New Yorker

“Brilliantly written. . . . Not reading this remarkable, indeed unique book, would be an immense mistake. . . . One of the great books published this year.” —Buffalo News

“A nuanced meditation from a life lived in the upper echelons of Chicago’s black bourgeoisie, beginning before the civil-rights era and trailing off in our still-conflicted present.” —Vulture

“Beautiful. . . . Artfully self-aware. . . . Jefferson succeeds at something remarkable: she tells her story while at the same time not only evocatively capturing her era but situating her experiences into a centuries-long cultural tradition.” —Bookslut

“Shines a spotlight on a fascinating slice of the American experience of which many people are barely aware.” —Tampa Bay Times

“Filled with incisive commentary and unexpected observations, all of it delivered with a sly wit and in crystalline prose.” —PopMatters

“A beautiful scorcher of a book, essential reading.” —Patricia Hampl, author of The Florist’s Daughter

“Elegantly pithy and violent. In the fissures between and among items, she revolts. Her words are ascetic. She doesn’t want me to envy her life, the fullness of which is only hinted at. She wants me to leave her alone to live within this sentence of her mother’s: ‘Sometimes I almost forget I’m a Negro.’” —David Shields, author of Salinger

“A great book, destined to be read for a century.” —Edmund White, author of A Boy’s Own Life

“Reads with the blast force of a prose poem.” —BookPage