Defenders of the Unborn: The Pro-Life Movement Before Roe V. Wade (Paperback) 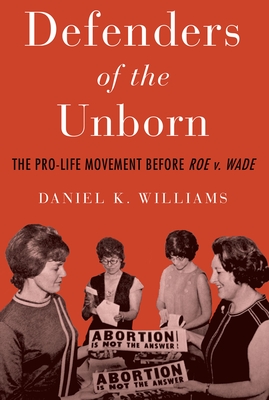 On April 16, 1972, ten thousand people gathered in Central Park to protest New York's liberal abortion law. Emotions ran high, reflecting the nation's extreme polarization over abortion. Yet the divisions did not fall neatly along partisan or religious lines-the assembled protesters were far from a bunch of fire-breathing culture warriors. In Defenders of the Unborn, Daniel K. Williams reveals the hidden history of the pro-life movement in America, showing that a cause that many see as reactionary and anti-feminist began as a liberal crusade for human rights. For decades, the media portrayed the pro-life movement as a Catholic cause, but by the time of the Central Park rally, that stereotype was already hopelessly outdated. The kinds of people in attendance at pro-life rallies ranged from white Protestant physicians, to young mothers, to African American Democratic legislators-even the occasional member of Planned Parenthood. One of New York City's most vocal pro-life advocates was a liberal Lutheran minister who was best known for his civil rights activism and his protests against the Vietnam War. The language with which pro-lifers championed their cause was not that of conservative Catholic theology, infused with attacks on contraception and women's sexual freedom. Rather, they saw themselves as civil rights crusaders, defending the inalienable right to life of a defenseless minority: the unborn fetus. It was because of this grounding in human rights, Williams argues, that the right-to-life movement gained such momentum in the early
1960s. Indeed, pro-lifers were winning the battle before Roe v. Wade changed the course of history. Through a deep investigation of previously untapped archives, Williams presents the untold story of New Deal-era liberals who forged alliances with a diverse array of activists, Republican and Democrat alike, to fight for what they saw as a human rights cause. Provocative and insightful, Defenders of the Unborn is a must-read for anyone who craves a deeper understanding of a highly-charged issue.

Daniel K. Williams is Associate Professor of History at the University of West Georgia. He is author of God's Own Party: The Making of the Christian Right.