The Wrath & the Dawn (The Wrath and the Dawn #1) (Paperback) 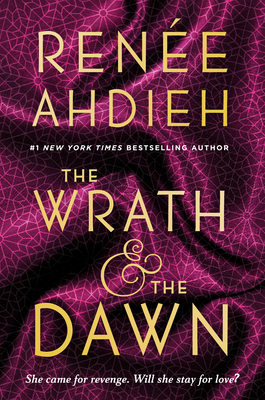 Every dawn brings horror to a different family in a land ruled by a killer. Khalid, the eighteen-year-old Caliph of Khorasan, takes a new bride each night only to have her executed at sunrise. So it is a suspicious surprise when sixteen-year-old Shahrzad volunteers to marry Khalid. But she does so with a clever plan to stay alive and exact revenge on the Caliph for the murder of her best friend and countless other girls. Shazi’s wit and will, indeed, get her through to the dawn that no others have seen, but with a catch . . . she’s falling in love with the very boy who killed her dearest friend.

She discovers that the murderous boy-king is not all that he seems and neither are the deaths of so many girls. Shazi is determined to uncover the reason for the murders and to break the cycle once and for all.

Renée Ahdieh is a graduate of the University of North Carolina at Chapel Hill. In her spare time, she likes to dance salsa and collect shoes. She is passionate about all kinds of curry, rescue dogs, and college basketball. The first few years of her life were spent in a high-rise in South Korea; consequently, Renée enjoys having her head in the clouds.

She lives in Charlotte, North Carolina, with her husband and their tiny overlord of a dog. The Wrath and the Dawn is her debut.

Praise for The Wrath and the Dawn:
#1 New York Times Bestseller
One of TIME Magazine’s 100 Best Fantasy Books of All Time
#4 on the Summer 2015 Kids' Indie Next List!
An Amazon Best Book of the Year for 2015 – Young Adult
A New York Public Library Best Book for Teens for 2015
A Seventeen Magazine Best Book of 2015
A YALSA 2016 Best Fiction for Young Adults Pick

“This inventive young adult retelling of The Arabian Nights walks a delicate line in its depiction of such a monstrous man, but puts the power in the hands of a courageous heroine who is determined to stop the senseless brutalities inflicted upon so many women.”—TIME Magazine

“This book is a fairy tale, a mystery, and … promises to become a classic tale of its own.”—VOYA

★ “Set against a backdrop of political intrigue and a simmering revolution, this is a carefully constructed narrative of uncertain loyalties, searing romance, and subtle magic in a harsh desert city.”—Booklist, starred review

★ “Renée Ahdieh's lush debut novel, The Wrath and the Dawn, is a suspenseful and beautiful reimagining of The Arabian Nights, with an edge.”—Shelf Awareness, starred review

“Sumptuous detail … satisfyingly steamy scenes, along with some angsty push and pull moments between the two for optimal romantic tension.”—BCCB

“Don’t be surprised if the pages melt away and you find yourself racing through warm, golden sands or drinking spiced wine in cool marble courtyards. This is an intoxicating gem of a story. You will fall in love, just as I did.”—Marie Lu, New York Times bestselling author of the Legend series and The Young Elites

“In her absorbing debut, Renée Ahdieh spins a tale as mesmerizing as that of her heroine Shahrzad, filled with lush details and brimming with tension. The Wrath and the Dawn is truly an exceptional story, beautifully written.”—Carrie Ryan,New York Times bestselling author of The Forest of Hands and Teeth

“Ahdieh weaves a world that is lush with detail. You will want to hear, taste, and touch everything. But it's not just the world that is vividly alive. The characters are fascinating too: I loved the friendships, romance, and shifts in feeling. A beautifully written book, The Wrath and the Dawn is a story I could not put down.”—Marie Rutkoski, author of The Winner’s Trilogy