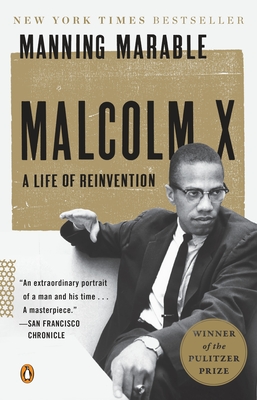 Winner of the Pulitzer Prize for History and a New York Times bestseller, the definitive biography of Malcolm X

Hailed as "a masterpiece" (San Francisco Chronicle), Manning Marable's acclaimed biography of Malcolm X finally does justice to one of the most influential and controversial figures of twentieth-century American history. Filled with startling new information and shocking revelations, Malcolm X unfolds a sweeping story of race and class in America. Reaching into Malcolm's troubled youth, it traces a path from his parents' activism as followers of Marcus Garvey through his own work with the Nation of Islam and rise in the world of black nationalism, and culminates in the never-before-told true story of his assassination. Malcolm X is a stunning achievement, the definitive work on one of our greatest advocates for social change.

Manning Marable (1951-2011) was M. Moran Weston and Black Alumni Council Professor of African American Studies and professor of history and public affairs at Columbia University. He was founding director of African American Studies at Columbia from 1993 to 2003, and directed Columbia’s Center for Contemporary Black History. The author of fifteen books, Marable was also the editor of the quarterly journal Souls.

“Malcolm X is etched in the American imagination—and the American psyche—in the particular and unyielding terms of radical and militant… Marable brings a lifetime of study to this biography, which is the crowning achievement of a magnificent career.”--Henry Louis Gates, Jr., Harvard University

“Manning Marable is the exemplary black scholar of radical democracy and black freedom in our time. His long-awaited magisterial book on Malcolm X is the definitive treatment of the greatest black radical voice and figure of the mid-twentieth century. Glory Hallelujah!”--Cornel West, Princeton University

“Manning Marable’s Malcolm X is his magnum opus, a work of extraordinary rigor and intellectual beauty … This majestic and eloquent tour de force will stand for some time as the definitive work on as enigmatic and electrifying a leader as has ever sprung from American soil.” --Michael Eric Dyson, Georgetown University, author of April 4, 1968

“It will be difficult for anyone to better this book... It is a work of art, a feast that combines genres skillfully: biography, true-crime, political commentary. It gives us Malcolm X in full gallop, a man who died for his belief in freedom.”--The Washington Post

“In his revealing and prodigiously researched new biography. . . Mr. Marable artfully strips away the layers and layers of myth that have been lacquered onto his subject’s life — first by Malcolm himself in that famous memoir, and later by both supporters and opponents after his assassination.”--Michiko Kakutani, The New York Times

“Unlike Bruce Perry’s 1991 biography, Malcolm, which entertained the most outlandish stories in an attempt to present a comprehensive portrait, Marable’s biography judiciously sifts fact from myth.”--The Atlantic

“Magisterial…Marable’s biography is an exceedingly brave as well as a major intellectual accomplishment.”--Boston Globe

“Marable has crafted an extraordinary portrait of a man and his time…A masterpiece.”--San Francisco Chronicle

“This book is a must read.”--Ebony

“Thankfully, we have Manning Marable's new biography, Malcolm X: A Life of Reinvention — which is, simply put, a stunning achievement — to help us better understand Malcolm’s complex life.”--The Philadelphia Tribune

“The book also has much to recommend it for its history of orthodox Islam, the perspective it offers on the black political movements of the 1950s and 1960s that changed America, and its insights into the development and inner workings of the Nation of Islam.”--The Financial Times

“Manning Marable’s scholarship was as provocative and profound as it was prodigious.”--Newsday

“[Marable] devoted his magnificent career—more than most scholars do—to living what he wrote and what he thought. His commitment not only to equality of opportunity but also to the exposure of falsehood and hypocrisy was a hallmark of his pathbreaking work.”--The Chronicle of Higher Education

“Marable accomplishes the difficult task of showing the bad boy of the civil rights era as an actual human being . . . Each page almost secretes the formidable research into hard facts. Marable lets the chips fall where they may because he is interested in the humanity of Malcolm X, as all true scholars should be.”--New York Daily News

“This is history at its finest—written with passion and attention and drive. It is a fitting testament to the lives and the legacies of both subject and author.”--TheBarnesandNobleReview.com

“Marable’s definitive biography is now the standard by which scholars can evaluate, not just what Malcolm X said, but what generations of others have said about him.”--The National

“This book is not the only representation of Manning's brilliance… it is a culmination of a lifetime of scholarship and activism, a larger project devoted to telling the stories of a people engaged in an epic, painful and beautiful struggle for freedom.”--BlackVoices.com

“This superbly perceptive and resolutely honest book will long endure as a definitive treatment of Malcolm’s life, if not of the actors complicit in his death.”--The Wilson Quarterly

“The book is cause for celebration . . . The book is full of revelations, big and small, and amounts to a full-on reconsideration of Malcolm’s life and death.”--VeryShortList.com

“As Malcolm lived on through his best-selling autobiography, so will Marable, through his unmatched body of writing, his educational contributions, his illuminations on Malcolm X's legacy and his devoted students.”--CNN.Com

“Manning was an unflinching and breathtakingly prolific scholar whose commitments to racial, economic, gender, and international justice were unparalleled . . . That we will have his long-anticipated, great and final work even as he leaves us is so classically, tragically appropriate.”--The Nation

“While Marable himself is irreplaceable, he has provided a foundation for future generations and will continue to shape our understanding of social change and justice.”--TheRoot.com