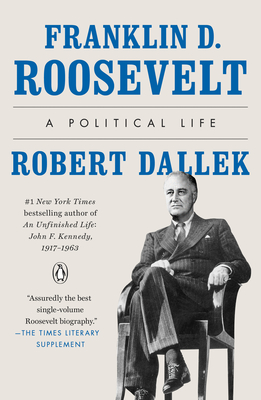 “We come to see in FDR the magisterial, central figure in the greatest and richest political tapestry of our nation’s entire history” —Nigel Hamilton, Boston Globe

“A workmanlike addition to the literature on Roosevelt.” —David Nasaw, The New York Times

“Will rank among the standard biographies of its subject” —Publishers Weekly

A one-volume biography of Roosevelt by the #1 New York Times bestselling biographer of JFK, focusing on his career as an incomparable politician, uniter, and deal maker

In an era of such great national divisiveness, there could be no more timely biography of one of our greatest presidents than one that focuses on his unparalleled political ability as a uniter and consensus maker. Robert Dallek’s Franklin D. Roosevelt: A Political Life takes a fresh look at the many compelling questions that have attracted all his biographers: how did a man who came from so privileged a background become the greatest presidential champion of the country’s needy? How did someone who never won recognition for his intellect foster revolutionary changes in the country’s economic and social institutions? How did Roosevelt work such a profound change in the country’s foreign relations?

For FDR, politics was a far more interesting and fulfilling pursuit than the management of family fortunes or the indulgence of personal pleasure, and by the time he became president, he had commanded the love and affection of millions of people. While all Roosevelt’s biographers agree that the onset of polio at the age of thirty-nine endowed him with a much greater sense of humanity, Dallek sees the affliction as an insufficient explanation for his transformation into a masterful politician who would win an unprecedented four presidential terms, initiate landmark reforms that changed the American industrial system, and transform an isolationist country into an international superpower.

Dallek attributes FDR’s success to two remarkable political insights. First, unlike any other president, he understood that effectiveness in the American political system depended on building a national consensus and commanding stable long-term popular support. Second, he made the presidency the central, most influential institution in modern America’s political system. In addressing the country’s international and domestic problems, Roosevelt recognized the vital importance of remaining closely attentive to the full range of public sentiment around policy-making decisions—perhaps FDR’s most enduring lesson in effective leadership.

Robert Dallek is the author of Camelot’s Court, An Unfinished Life, and Nixon and Kissinger, among other books. His writing has appeared in The New York Times, The Washington Post, The Atlantic Monthly, and Vanity Fair. He is an elected fellow of the American Academy of Arts and Sciences and of the Society of American Historians, for which he served as president in 2004–2005. He lives in Washington, D.C.

“Meticulously researched and authoritative. . . . Adequate single-volume biographies about FDR abound. But none are as heroically objective and wide-angled as this fine Dallek effort. . . . By tapping into the vast correspondence between Churchill and Roosevelt, Dallek discerns a more strained relationship between the leaders than presupposed. . . . Luckily for us, Roosevelt is with us again in Dallek’s outstanding cradle-to-grave study. When it comes to choosing the two indispensable presidents in U.S. history, Dallek places Roosevelt alongside Abraham Lincoln, the other great improviser with Providence on his side.”
—Douglas Brinkley, The Washington Post

“Dallek fully incorporates into his narrative Roosevelt’s complicated, conflicted relationship with the several women in his life and is especially good on the role Eleanor played, as goad and political advisor. He also makes it clear, in a way other biographers do not, that almost from the moment he entered office, Roosevelt set out to educate the nation to the fact that the United States was threatened not only by economic depression at home, but also by fascist aggressions abroad. . . . Dallek’s is a workmanlike addition to the literature on Roosevelt.”
—David Nasaw, The New York Times

“Dallek constantly seeks to find an answer to FDR’s political trajectory: What fueled his ambition to serve in the political arena and with what political aims? Also the extent to which it was FDR’s experiences—abroad as a child, then at school, at Harvard, in the New York legislature—that determined his later progress in the real world. Undergirding all of these, Dallek sees Roosevelt’s moral war on deceit and corruption. In an era in which moral, linguistic, and financial corruption hold sway, this story could not be more timely. . . . From beginning to end Dallek has earnestly followed his own curiosity as a citizen and as a teacher, so that at last we come to see in FDR the magisterial, central figure in the greatest and richest political tapestry of our nation’s entire history.”
—Nigel Hamilton, Boston Globe

“[Dallek] believes that FDR was a born politician of ferocious and very nearly infallible instincts, and through a combination of extensive research and first-rate storyteller’s gifts, he makes the reader believe it, too. His Roosevelt is a man of great but always complicated drives, a worrier and second-guesser who nonetheless often believed the intensely stirring things he so often said and wrote. . . . Dallek relates in fine and compelling detail all the thorniest scandals of the FDR years. . . . But far more prominent than scandal in these pages—and far more welcome—are Dallek’s frequent examinations of the now-forgotten political opposition FDR faced at every stage of his long tenure as president. . . . We see FDR afresh, which is an amazing feat in its own right.”
—Steve Donoghue, Christian Science Monitor

“An insightful, incisive and intelligent one-volume work of biography and history—and a pointed primer on how things in Washington get done. In a period defined by division, gridlock and tweet storms, Dallek crafts a pointillist portrait of the four-term president, who knew almost intuitively how to use the power of his office and how to reach consensus.”
—Peter M. Gianotti, Newsday

“Few scholars have the qualifications of Robert Dallek to tell this story. . . . Franklin D. Roosevelt: A Political Life covers much more than the momentous challenges faced by FDR as president. It gives an honest outline of his life including his attitudes as a privileged ‘undemocratic snob’ who used ‘the influence of men he considered unworthy of public influence.’ . . . Despite the book’s size, the complexity of its subject, and the narrative’s variance with common public memory, it is a fast engaging read that corrects, even scatters, misconceptions. The author provides an entertaining narrative in a style not unlike that of FDR.”
—Robert S. Davis, New York Journal of Books

“A characteristically adroit work that is balanced in coverage and prudent in assessment. . . . [Dallek’s] emphasis falls on the two great crises of FDR’s presidency—the Depression and WWII—and highlights FDR’s emergence as a skillful politician. . . . All will benefit from Dallek’s principal addition to earlier works on FDR: the convincing argument that as early as May 1943 FDR was showing signs of the illness that would kill him. The result is a comprehensive retelling of a major American life that will rank among the standard biographies of its subject.”
—Publishers Weekly

“This focused study of the four term-winning president emphasizes his instinctive feel for the public mood. . . . Dallek is a seasoned presidential historian and biographer. Here, he writes with authority about Franklin Roosevelt’s political life and mission to create a ‘new social order’ during a time of ‘enduring national transformation.’ . . . Dallek examines several formative factors that contributed greatly to Roosevelt's ability to successfully tap the public sentiment and address significant issues. . . . The author also effectively shows how Roosevelt was an astute political animal who sometimes made questionable decisions for political expedience. . . . A lively one-volume treatment well-suited to libraries and schools.”
—Kirkus Reviews

“[Dallek] takes on the daunting task of providing a comprehensive one-volume biography of Franklin Delano Roosevelt. He succeeds in presenting the abundance of information in a flowing and highly readable narrative, and he supports FDR’s story with memorable sketches of the president’s many associates . . . his varied opponents, the foreign leaders who served opposite him (Dallek is particularly good on Churchill), and many others. Eleanor, too, is portrayed in full, complete with a notably honest account of her marriage to Franklin. . . . A first-rate biography and a must-buy for most public-library history collections.”
—Booklist (starred review)

“Recounts the politician’s greatest challenges, including trying presidential elections and the years leading up to and during World War II. Dallek’s familiarity with his subject and deep understanding of American history and context shines in his clear and engaging prose. . . . readers will gain a solid sense of Roosevelt’s political mind and an inspiring appreciation of his mighty character. . . . This highly recommended, expertly crafted book will please a variety of readers, especially those interested in biographies as well as presidential, military, and American history.”
—Library Journal (starred review)

“Robert Dallek has brought a lifetime’s immersion in the American presidency to produce what will almost certainly be seen as the most authoritative single-volume biography of our most important 20th Century president. Franklin D. Roosevelt: A Political Life is a landmark work that deserves to be placed on the same shelf as those of Arthur Schlesinger Jr., James MacGregor Burns, and William E. Leuchtenburg.”
—Richard Moe, author of Roosevelt’s Second Act: The Election of 1940 and the Politics of War

“A great liberal historian has written the best one-volume biography about our greatest liberal president.  Sparing neither criticism nor admiration, Robert Dallek offers an FDR relevant to our sharply divided nation: a master politician who gained the trust of most of his fellow Americans by empathizing eloquently with their problems and working himself to death to solve them.”
—Michael Kazin, author of War Against War: The American Fight for Peace, 1914-1918

“Robert Dallek is a leading authority on the presidency and his book on Roosevelt is a masterful and complex portrayal of one of America’s greatest presidents, a leader who had the vision and character to reveal to the country its potential as a great nation.”
—Howard Dean, former DNC chairman and six-term governor of Vermont

“Robert Dallek’s brilliant portrayal of Franklin D. Roosevelt is an inspiring read, a timely reminder that political leadership involves judgment and intelligence. Battling the Great Depression and a global war, the 32nd president harnessed wisdom to decision making, and political acumen to governance. No historian understands FDR better than Dallek, who has captured in this single page-turning volume how America was really ‘made great again.’”
—Martin J. Sherwin, Pulitzer Prize-winning author of American Prometheus: The Triumph and Tragedy of J. Robert Oppenheimer