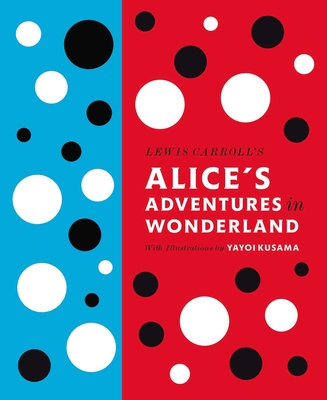 Since childhood, Kusama has been afflicted with a condition that makes her see spots, which means she sees the world in a surreal, almost hallucinogenic way that sits very well with the Wonderland of Alice. She is fascinated by childhood and the way adults have the ability, at their most creative, to see things the way children do, a central concern of the Alice books. The classic book is colour illustrated with a clothbound jacket, and produced to very high specification. Kusama's images are interspersed throughout the text. Produced in collaboration with the Kusama Studio, Tokyo and Gagosian Gallery.

Charles Lutwidge Dodgson, known by his pen name, Lewis Carroll, was a man of diverse interests - in mathematics, logic, photgraphy, art, theater, religion, medicine, and science. He was happiest in the company of children for whom he created puzzles, clever games, and charming letters.

As all Carroll admirers know, his book Alice's Adventures in Wonderland (1865), became an immediate success and has since been translated into more than eighty languages. The equally popular sequel Through the Looking-Glass and What Alice Found There, was published in 1872.

The Alice books are but one example of his wide ranging authorship. The Hunting of the Snark, a classic nonsense epic (1876) and Euclid and His Modern Rivals, a rare example of humorous work concerning mathematics, still entice and intrigue today's students. Sylvie and Bruno, published toward the end of his life contains startling ideas including an 1889 description of weightlessness.

The humor, sparkling wit and genius of this Victorian Englishman have lasted for more than a century. His books are among the most quoted works in the English language, and his influence (with that of his illustrator, Sir John Tenniel) can be seen everywhere, from the world of advertising to that of atomic physics.

“A breathtaking piece of visual philosophy to complement Carroll’s timeless vision...a striking contender for the most visually captivating take on Alice’s Adventures in Wonderland yet.”
—BrainPickings

“Yayoi Kusama’s visionary take on Lewis Carroll’s Alice in Wonderland...shows how no matter how old you are, childhood never has to end.”
—Huffington Post

“A charming little book...this is pretty much the perfect pairing.”
—Flavorwire