Confessions of a Puppetmaster: A Hollywood Memoir of Ghouls, Guts, and Gonzo Filmmaking (Hardcover) 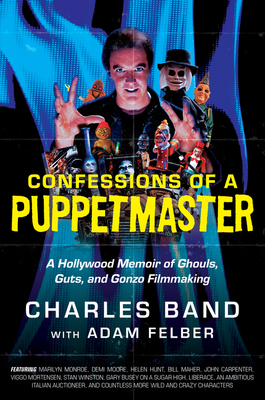 Shlockmaster Charles Band is known for getting things done fast, cheap, and over the top, and his new memoir checks all the boxes. As satisfying as a hit from an evil bong, as absurd as Gary Busey back from the dead as a killer cookie, as juicy as the Blood of 1000 Virgins, "Confessions of a Puppetmaster" is a good, old-fashioned gossip rag wrung dry by the scheming, shmoozing, macabre mind of the fastest buck in Hollywood.

“Confessions of a Puppetmaster is a fast, funny, wild ride through some wild times. Plus, Charlie compares me to Harrison Ford, so I’m all in!” —Bill Maher

Renowned producer, director, and “B movie” showman Charles Band takes readers on a wild romp through Hollywood’s decidedly un-Oscar-worthy underbelly, where mayhem and zombies reign supreme, and cheap thrills and entertainment are king

"This book is a blast. It made me want to stay up all night and watch terrible movies." —Peter Sagal

"One of the most entertaining film bios ever." —Larry Karaszewski

Zombies, aliens, a little skin, lots of gore—and even more laughs—the cinematic universe of Charles Band is legendary. From the toilet-invading creatures of Ghoulies to the time-travelling bounty hunter in Trancers to the pandemic-crashed Corona Zombies, Band has spent four decades giving B-movie lovers exactly what they love. In Confessions of a Puppetmaster, this congenial master of Grindhouse cinema tells his own story, uncut.

Born into a family of artists, Band spent much of his childhood in Rome where his father worked in the film industry. Early visits to movie sets sealed young Charlie’s fate. By his twenties he had plunged into moviemaking himself and found his calling in exploitation movies—quick, low-budget efforts that exploit the zeitgeist and feed people’s desire for clever, low-brow entertainment. His films crossed genres, from vampire flicks to sci fi to erotic musical adaptations of fairy tales. As he came into his own as a director, he was the first to give starring roles to household names like Demi Moore, Helen Hunt, and Bill Maher.

Off set, Band’s life has been equally epic. Returning to his beloved Italy, he bought both Dino De Laurentiis’s movie studio and a medieval castle. After Romania’s oppressive communist regime fell, he circumvented the U.S. State Department to shoot films in Dracula’s homeland. He made—and then lost—a moviemaking fortune. A visionary, Band was also at the vanguard of the transition to home video and streaming, making and distributing direct-to-video movies long before the major studios caught on.

In this revealing tell-all, Band details the dizzying heights and catastrophic depths of his four decades in showbiz. A candid and engaging glimpse at Hollywood’s wild side, Confessions of a Puppetmaster is as entertaining as the movies that made this consummate schlockmeister famous.

Charles Band is a renowned producer, director, mogul, and “B movie” showman. He has directed or produced more than 360 films, including cult classics like Ghoulies and Tourist Trap, one of Stephen King’s favorite horror movies. He lives in Los Angeles.

Adam Felber is an Emmy-nominated and WGA Award-winning writer and performer whose credits include Real Time with Bill Maher, and the children’s programs Wishbone and Arthur. He lives in Los Angeles.

"One of the most entertaining film bios ever. You get zombies, Nazis, Marilyn Monroe - and that's just the first few pages! Band has made over 300 movies and he has enough crazy stories for at least that many books." — LARRY KARASZEWSKI, screenwriter, Ed Wood, The People Vs. Larry Flynt, Big Eyes, Dolemite Is My Name

"Welcome to the delightful, insane, and utterly joyous world of Charlie Band. The visionary behind Full Moon and Empire Pictures tells his story with all the energy and wit you would expect from him. It is all in these pages: the huge personalities; the tricks of the trade; the incredible let’s-make-a-movie-right-now-dammit persistence. Charlie is the ultimate Hollywood indie hustler and horror movie maverick, responsible for some of the wildest and most entertaining films in history. Thank God we have a guy like Charlie to keep the indie horror flame burning!" — JOHN LOGAN, screenwriter, Gladiator, Skyfall, The Aviator, Hugo

"This book is a blast. It made me want to stay up all night and watch terrible movies."  — PETER SAGAL, host, Wait Wait... Don't Tell Me!

"Reads like a Tarantino film written by Hunter S. Thompson. ... Anyone with an interest in the film business from the '70s to the '90s will enjoy this memoir." — Booklist

"Band [is] a master storyteller with a genius imagination, a flair for the macabre, and a killer instinct for creating art that crosses genres and boundaries. ... A wildly entertaining read." — Library Journal

"Band is a B-movie legend, and this colorful book documents his approch." — The Film Stage