House of Correction: A Novel (Paperback) 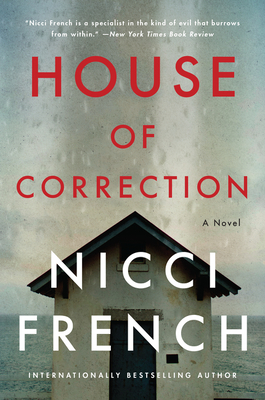 Named a New York Times Best Book to Give!

“This house of correction is booby-trapped with twists, the floors paved with trapdoors, quicksand churning in the garden. Enter if you dare.” –A.J. Finn, #1 New York Times bestselling author of The Woman in the Window

In this heart-pounding standalone thriller from bestselling author Nicci French, a woman accused of murder attempts to solve her own case from the confines of prison—but as she unravels the truth, everything is called into question, including her own certainty that she is innocent.

Tabitha is not a murderer.

When a body is discovered in Okeham, England, Tabitha is shocked to find herself being placed in handcuffs. It must be a mistake. She’d only recently moved back to her childhood hometown, not even getting a chance to reacquaint herself with the neighbors. How could she possibly be a murder suspect?

She knows she’s not.

As Tabitha is shepherded through the system, her entire life is picked apart and scrutinized —her history of depression and medications, her decision to move back to a town she supposedly hated . . . and of course, her past relationship with the victim, her former teacher. But most unsettling, Tabitha’s own memories of that day are a complete blur.

She thinks she’s not.

From the isolation of the correctional facility, Tabitha dissects every piece of evidence, every testimony she can get her hands on, matching them against her own recollections. But as dark, long-buried memories from her childhood come to light, Tabatha begins to question if she knows what kind of person she is after all. The world is convinced she’s a killer. Tabatha needs to prove them all wrong.

But what if she’s only lying to herself?

Nicci French is the pseudonym of English wife-and-husband team Nicci Gerrard and Sean French. Their acclaimed novels of psychological suspense have sold more than 16 million copies around the world.

"Nicci French will leave readers questioning everything they think they know." — Popsugar on House of Correction

"If you enjoy a whodunit headed up by a slightly unreliable narrator who is also an amateur sleuth, this unsettling yet sharp suspense novel will be most enjoyable." — Addison Independent on House of Correction

"Seamlessly shifts from prison drama to procedural to legal thriller—and finally to an ingenious twist on the locked-room mystery. French continues to impress." — Publishers Weekly on House of Correction

"Another winner . . . combining an impeccably constructed, secrecy-prone English village with masterful plotting and an indefatigable protagonist who carries on, no matter the cost."
— Booklist on House of Correction

"Genius . . . a lot of fun . . . Nicci French always writes great novels and this is no exception. The character of Tabitha is one of the best ones all year in any novels I have read." — Red Carpet Crash on House of Correction

"Razor-sharp writing by French expertly amps the tension." — People on The Lying Room

“Having ended the saga of forensic psychologist Frieda Klein on a suitably harrowing note, French produces a stand-alone that’s just as suspenseful . . . The sorely tried heroine realizes, “I can’t trust anyone.” Neither can the expertly manipulated reader.” — Kirkus Reviews on The Lying Room

“Fans of domestic thrillers will be rewarded.” — Publishers Weekly

"An enthralling and addicting novel . . . Longtime fans of French will find their high expectations rewarded, while newcomers will be motivated to explore the author’s backlist. I envy their discovery."
— Book Reporter on The Lying Room

"An enjoyable mystery that offers unique views of the legal system and is a refreshing change of pace for readers of this genre." — Book Reporter on House of Correction

"A big book, as always, and more than one kind of thriller, even though brilliantly integrated into one headlong narrative. It’s all-out psychological suspense: the central figure is maybe the hardest-to-like Nicci French antiheroine yet (and you’ll be rooting for her almost at once); but then it’s also a smashing courtroom drama.”  — The Shawangunk Journal (New York) on House of Correction

“Nicci French crafted a blisteringly intense thriller about a woman trying to prove her innocence from the confines of prison . . . House of Correction is a gripping drama that will leave thriller lovers rapidly turning the page as twist after twist unfurls.”  — News Times (Connecticut) on House of Correction

“This is a skillful and powerfully written blending of genres: an unsparing look at prison life, an unruly courtroom drama, a well-plotted murder mystery, and, most of all, a raw portrait of an angry, damaged woman whose complete disregard for being liked serves her very well indeed.”  — Air Mail on House of Correction

“Readers who love stories of empowered underdogs will cheer for Tabitha as she pieces together the facts that will prove her guilt or innocence." — The Big Thrill on House of Correction