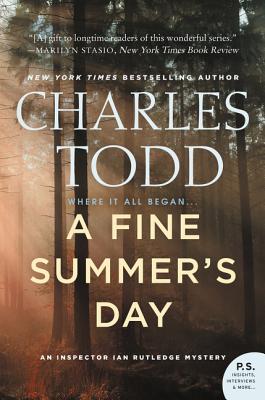 This is book number 17 in the Inspector Ian Rutledge Mysteries series.

On a fine summer’s day in June, 1914, Ian Rutledge pays little notice to the assassination of an archduke in Sarajevo. An Inspector at Scotland Yard, he is planning to propose to the woman whom he deeply loves, despite intimations from friends and family that she may not be the wisest choice.

To the north on this warm and gentle day, another man in love—a Scottish Highlander—shows his own dear girl the house he will build for her in September. While back in England, a son awaits the undertaker in the wake of his widowed mother’s death. This death will set off a series of murders across England, seemingly unconnected, that Rutledge will race to solve in the weeks before the fateful declaration in August that will forever transform his world.

As the clouds of war gather on the horizon, all of Britain wonders and waits. With every moment at stake, Rutledge sets out to right a wrong—an odyssey that will eventually force him to choose between the Yard and his country, between love and duty, and between honor and truth.

“An excellent tale. As always when it comes to Charles Todd, this mother/son team of authors are in-depth, refined, and offer up a true thriller of a story.” — Suspense Magazine on A Fine Summer's Day

“A very welcome addition to, and expansion of, a much-loved series.” — Booklist

“The books are Charles Todd recounting the cases of Scotland Yard Inspector Ian Rutledge in the days following WWI are as quintessentially English as anything by Ruth Rendell, PD James or John Harvey....These are some of the finest historical mystery novels in print....Todd [is] in top form again.” — BookPage on A FINE SUMMER'S DAY

“Readers familiar with the series can’t imagine a Rutledge who doesn’t hear the voice of MacLeod in his head, and this novel adds poignancy to the Rutledge we avidly follow. Grade: A” — Cleveland Plain Dealer

“A tight plot keeps readers on the edge until the stunning final pages.” — Library Journal

“A Fine Summer’s Day” is a high point in this evocative series that has never disappointed.” — South Florida Sun Sentinel

“A FINE SUMMER’S DAY is an absolute pleasure to read and a true treat for faithful readers of this series.” — Bookreporter.com