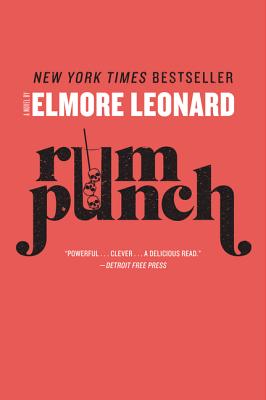 Rum Punch is classic Elmore Leonard—the electrifying thriller that served as the basis for the acclaimed film Jackie Brown by director Quentin Tarantino, starring Pam Grier, Robert DeNiro, and Samuel L. Jackson. Leonard’s story of a not-altogether-blameless flight attendant on the run from her vicious gun-running sometime employer who sees her as a troublesome loose end, Rum Punch is “the King Daddy of crime writers” (Seattle Times) at his sharpest and most ingeniously entertaining. In fact, People magazine calls it, “Leonard’s best work. He brilliantly reaffirms his right to the title of America’s finest crime fiction writer.” Enjoy this sensational noir winner from the creator of the character of U.S. Marshal Raylan Givens, lately of TV’s hit series Justified, and see why the great Elmore Leonard stands tall in the company of America’s most legendary crime fiction masters: John D. MacDonald, Dashiell Hammett, James M. Cain, et al.

Elmore Leonard wrote more than forty books during his long career, including the bestsellers Raylan, Tishomingo Blues, Be Cool, Get Shorty, and Rum Punch, as well as the acclaimed collection When the Women Come Out to Dance, which was a New York Times Notable Book. Many of his books have been made into movies, including Get Shorty and Out of Sight. The short story "Fire in the Hole," and three books, including Raylan, were the basis for the FX hit show Justified. Leonard received the Lifetime Achievement Award from PEN USA and the Grand Master Award from the Mystery Writers of America. He died in 2013.

“The greatest crime writer of our time, perhaps ever!” — The New York Times Book Review