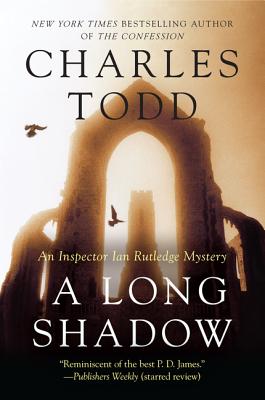 This is book number 8 in the Inspector Ian Rutledge Mysteries series.

“Seamless in its storytelling and enthralling in its plotting.”
—Ft. Lauderdale Sun-Sentinel

“Dark and remarkable….Once [Todd] grabs you, there’s no putting the novel down.”
—Detroit Free Press

The Winston-Salem Journal declares that, “like P. D. James and Ruth Rendell, Charles Todd writes novels that transcend genre.” A Long Shadow proves that statement true beyond the shadow of a doubt. Once again featuring Todd’s extraordinary protagonist, Scotland Yard investigator and shell-shocked World War One veteran, Inspector Ian Rutledge, A Long Shadow immerses readers in the sights and sounds of post-war Great Britain, as the damaged policeman pursues answers to a constable’s slaying and the three-year-old mystery of a young girl’s disappearance in a tiny Northamptonshire village. Read Todd’s A Long Shadow and see why the Washington Post calls the Rutledge crime novels, “one of the best historical series being written today.”

“Incisive as ever.” — Kirkus Reviews

“A daunting portrait of a town that keeps its thoughts, its troubles and most of all its secrets to itself.” — New York Times Book Review

“[A] remarkable series....Keeps readers on the edge right up to the stunning end.” — Detroit Free Press