The Vampire Diaries: The Awakening and The Struggle (Paperback) 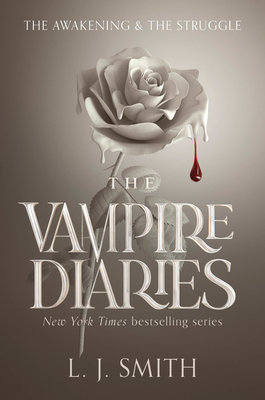 Elena Gilbert is a high school golden girl, used to getting what she wants. And who she wants. But when the boy she’s set her sights on—the handsome and haunted Stefan—isn’t interested, she’s confused.

She could never know the real reason Stefan is struggling to resist her: Stefan is a vampire, and Elena’s in danger just by being around him. What’s more, Stefan’s dark, dangerous vampire brother Damon has just arrived in town.

Perfect for fans of Midnight Sun, The Beautiful, and Crave, this paperback bind-up of the first two books in the New York Times bestselling Vampire Diaries series by L. J. Smith—The Awakening and The Struggle—will introduce new readers to the heart-stopping suspense, fierce romances, and jaw-dropping surprises that captured millions of fans and inspired the hit TV show.

L. J. Smith has written over two dozen books for young adults, including The Vampire Diaries, now a hit TV show. She has also written the bestselling Night World series and The Forbidden Game, as well as the #1 New York Times bestselling Dark Visions. She loves to walk the trails and beaches in Point Reyes, California, daydreaming about her latest book.