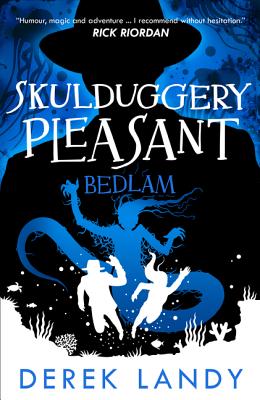 This is book number 12 in the Skulduggery Pleasant series.

The 12th explosive novel in the internationally bestselling Skulduggery Pleasant series, BEDLAM will blow your mind - and change everything...

On a desperate journey to recover her sister's lost soul, Valkyrie Cain goes up against the High Sanctuary itself, and there's nothing Skulduggery Pleasant can do to stop her.

With Abyssinia's grand plan about to kick off in a night of magic, terror, and bloodshed, it falls to Omen Darkly to save the lives of thousands of innocent people.

And as the madness unfolds around him, as hidden enemies step into the light, and as Valkyrie is sucked into a desperate, lawless quest of her own, he has no choice but to become the hero he never really wanted to be -- or die in the attempt.

Derek Landy lives near Dublin. Before writing his children's story about a sharply dressed skeleton detective, he wrote the screenplays for a zombie movie and a murderous horror film. "I think my career-guidance teacher is spinning in her grave," he says, "or she would be if she were dead."