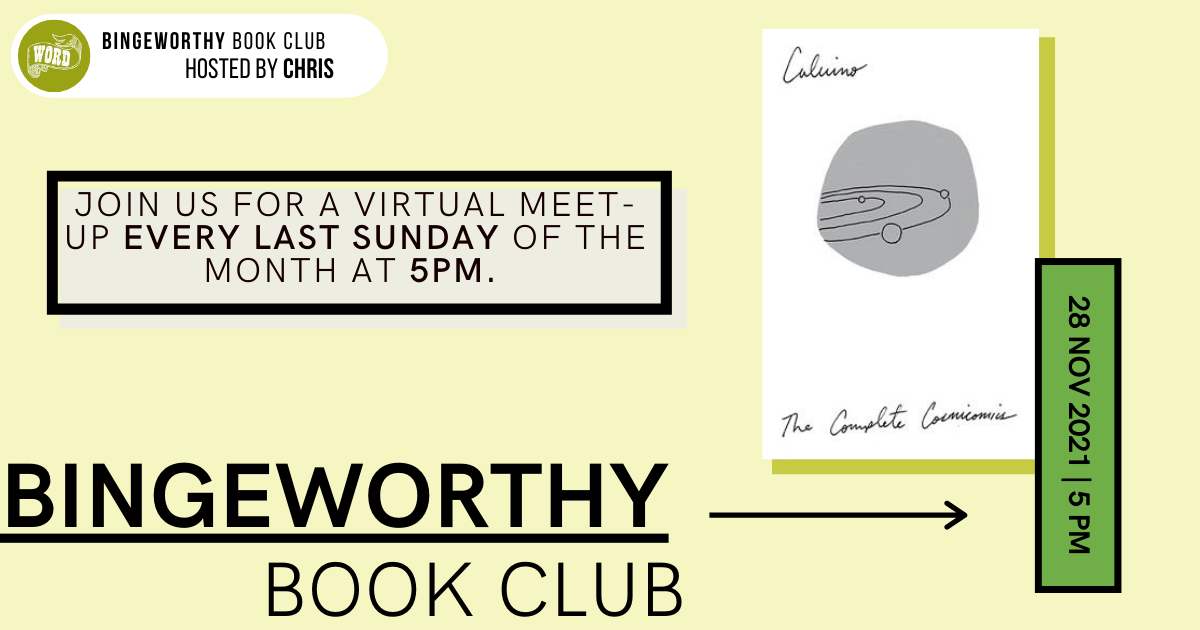 If you would like to join our discussion, RSVP HERE! Once you RSVP we will send the meeting link to the email you provide.

A group dedicated to short stories. A Collection will be picked and 1 or 2 stories will be chosen on for most of our focus. Towards the end of our time we will open up to see if anyone wants to talk about any other stories in the collection. In the future, maybe we put the story we focus on up to a vote.

Book group selections are 10 percent when purchased at WORD.

The definitive edition of the cosmicomics, Italo Calvino's short stories explore natural phenomena and the origins of the universe. The Complete Cosmicomics brings together all of these enchanting stories -- including some never before translated -- in one volume for the first time.

Italo Calvino's beloved cosmicomics cross planets and traverse galaxies, speed up time or slow it down to the particles of an instant. Through the eyes of an ageless guide named Qfwfq, Calvino explores natural phenomena and tells the story of the origins of the universe. Poignant, fantastical, and wise, these thirty-four dazzling stories -- collected here in one definitive anthology -- relate complex scientific and mathematical concepts to our everyday world. They are an indelible (and unfailingly delightful) literary achievement.

Italo Calvino (1923-1985) attained worldwide renown as one of the twentieth century s greatest storytellers. Born in Cuba, he was raised in San Remo, Italy, and later lived in Turin, Paris, Rome, and elsewhere. Among his many works are the novels If on a winter s night a traveler and The Baron in the Trees, as well as numerous collections of fiction, folktales, criticism, and essays. His work has been translated into dozens of languages.

ABOUT THE BOOK CLUB FACILITATOR

Chris Terranova is an excitable connoiseur of the eloquent, the uncanny, the sacred, and the profane.  When he is not selling books, he can be found watching old movies, selling magic beans, and grinding your bones to make his bread.

Click HERE to return to our Virtual Book Club homepage!

Her Body and Other Parties: Stories (Paperback)

Stories to Discuss: The Husband Stitch & Real Women Have Bodies

Stories to Discuss: The Merchant and the Alchemist's Gate and The Truth of Fact, the Truth of Feeling

Stories to Discuss: Ghosts, Cowboys and The Digging

A Swim in a Pond in the Rain: In Which Four Russians Give a Master Class on Writing, Reading, and Life (Hardcover)

Homesick for Another World: Stories (Paperback)

Bobcat and Other Stories (Paperback)